Item One: Several of you asked about LFG and her Trick or Treating endeavours. Here’s photo evidence of my little M&M and two of her besties. I lasted just long enough to take photos and go back to bed. I don’t have the full blown H1N1 but I’ve definitely got the runner up. 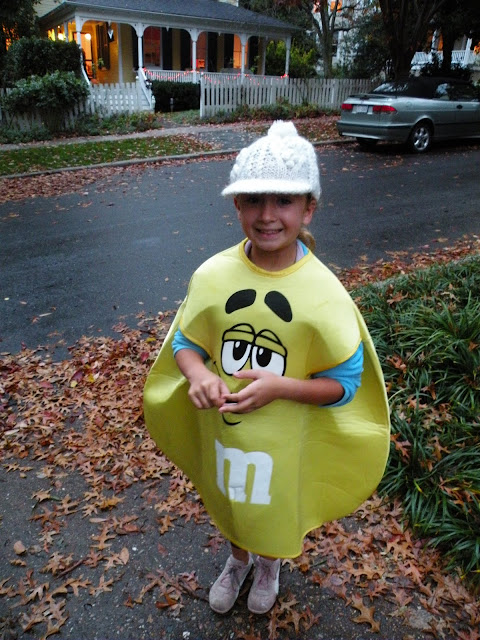 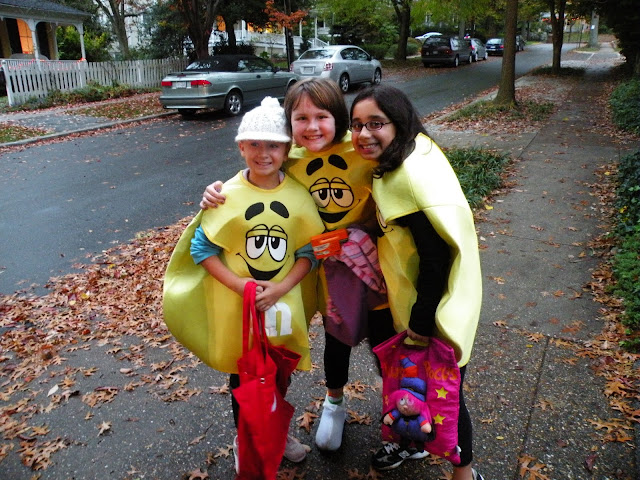 And Her Other M&Ms
Item Two: So many of you were very kind and encouraging to me when I put a tentative toe in the blogging water. I’ve made a discovery that I DEMAND you check out and read and add as a fave and become a follower etc.
Mon Avis, Mes Amis is the English Country corollary to so many of our great “gal blogs” over here. It's Brideshead meets soccer-school plays-parenting-colour-texture-books-drinks-travel-snotty noses and misplaced jumpers and homework. Superb writing with just the right amount of British Colonial-Sardonic Aplomb. To quote her observations about another author…”I’d read her grocery lists”. You’ll just find some damned good writing over there.
I wish that I could turn phrases like these……
“….Then a trip home on the redjet with the delightful company of the Friday night commuters who will have been necking gin and tonics since Waterloo.
…My server is still buggered which is driving me slowly mad. I am hoping in my absence that the techy-geeks-who-still-live-with-their-mums will mend it.. Or I'll be doing a massive Naomi Campbell on them when I get back.
...with siren voices. Am off this avo for an eyewateringly expensive haircut, mooch round South Audley St, Hatchards and some drinks with amusing and cosmopolitan literary types. Oh the utter utter bliss.
….What wouldn't I give for a cocktail. Yes, I am aware it's ten am here. Your point, caller?...”
So get on over there and make yourself known. 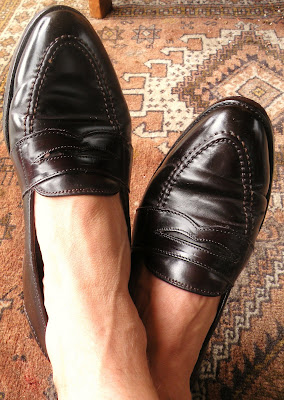 The men’s store that I worked in during holidays and summers had a patina. So do shell cordovan shoes. The nature of the muscle sheath-or “shell” from a horse’s flank ensures a patina relatively fast-after six months or so of curing the hide before being made into a pair of shoes. The haberdashery of my youth had a time born patina having opened in 1927. The fixtures were original and had layers of polish, nicks and memories all over them. I know this well-I walked around constantly when there were no customers in the store-cleaning glass and shining fixtures. It also had a smell that imbued for me an olfactory patina if there can be such a thing. It smelled like men-Bay Rum and tobacco. This was an ultra trad alpha male kind of haberdashery-nothing foppish about this joint. The first time I smelled the place was with my dad when I’d go with him to pick up stuff he’d bought. My dad was a clothes fanatic. I was probably five or six years old and I remember as a small child feeling that it was too cold in the store-hyper air-conditioned in the summer. I can smell the place as I write this.My uniform was fairly typical when I worked there. Navy blue Stanly Blacker blazer-odd trousers of khaki-seersucker-tropical weight British tan or light gray-a Gant button down-regimental stripe tie and always Weejuns. Either the navy ones or the brown pair-both of which you’ve come to know to a degree greater than I’m sure you wanted.Ernie had a bit of a gloss and a layer of what I’d call “trad patina” which is interesting since he was only in his thirties. My mom always said he looked “freshly scrubbed”. He was a local boy, having returned to our hometown and the store, after working post Vietnam down in Charleston at the very traditional and a bit higher end clothing store-Jack Krawcheck. Ernie eventually bought our hometown haberdashery. Mr. C. - the guy we worked for-bought the store from the founder in 1947 after he returned from the War and sold it to Ernie in the mid 1980’s. 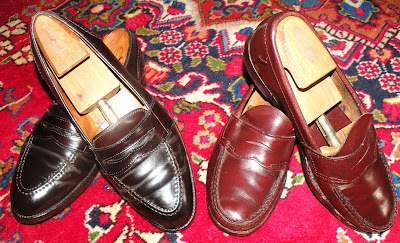 I’m standing at the front of the store one morning when Ernie walked in. My brown Weejuns are shined to a nice gloss-not yet victimized by roofing tar. That was a few years down the road. I look down at Ernie’s shoes and they are glossy beyond description. I’d never seen anything like it before. They looked like Weejuns but not quite. They were just different enough in construct for me to know that they weren’t’ made by Bass. All I know is that my Weejuns went from sugar to shit in about thirty seconds. Kind of like my MG Midget did when my dad showed me the Triumph GT-6 that I was on the cusp of owning. The MG was fine-at least until I saw the GT-6. 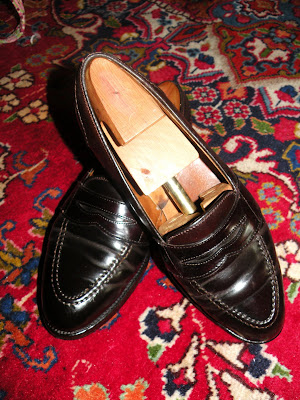 So I’m thinking that Ernie is using some kind of special polish on his nicer than Weejuns loafers. All I need to do is get some of that deeper darker ox blood looking polish and go to work on my Weejuns. That’s when I received from Ernie the shell cordovan tutorial. The lore-the back story as well as the realization that I wouldn’t own a pair any time soon. You couldn’t buy them in my hometown and I didn’t have the dough anyway. They were absurdly expensive and rightfully so. Ernie wore a half size larger than me-otherwise I would have stolen his. Horsehide? But more precisely-the muscle sheath of the rear flank-yielding enough material per horse for only a couple of pairs of shoes? Ok, I’m getting the picture. But I’m also lusting for the depth of shine-the deep patinated luster of the shoes. Alas, I would be thirty before I owned a pair. 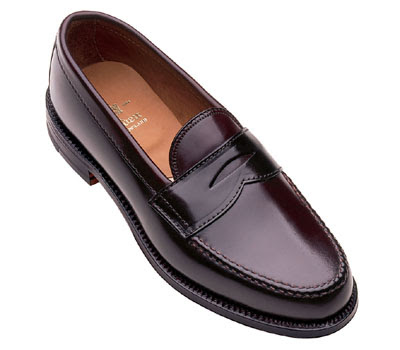 Mine are the Alden Full Strap version-number 684 in color 8. There are color variations but if you are only gonna own one pair-they must be color 8. Ernie sported the Alden Leisure version-style number 986. 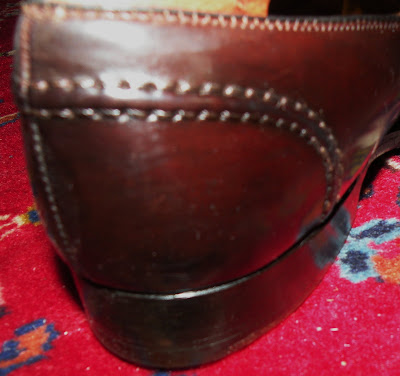 There are other characteristics of Alden loafers that make you aware of the fact that they are nicer than Weejuns. Kind of a "better than you" thing. 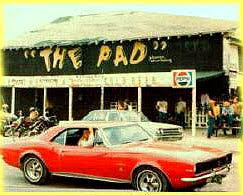 Ernie's shoe story and the tutorial was one thing. Ernie’s stories of Ocean Drive in the 1960’s were even better. The Pad was THE place to hang out in the 1960's after being on the beach all day-in Ernie’s case-as a life guard for Vernon’s Beach Service. You donned Bermuda shorts or khakis-hemmed and cuffed a bit too short in order to show off your tanned ankles while shagging (shagging-the Carolina dance-not the British thang-that often occurred later-after the dancing). Your loafers HAD to be shined to a gloss before hosting the aforementioned tanned ankles. A guy’s midsection was usually bisected with an alligator belt and slide buckle. 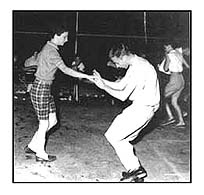 Learning the intricacies of the southern dance as well as sporting the trad summer uniform was generally done for the purposes of successfully navigating the dating-mating ritual. Like most things college boys do-you did it for the girls. I still have behaviors-tethered exclusively to the idea that girls like it or expect it.
I can’t think of Ernie without thinking about shell cordovan loafers and tanned ankles. But I can’t think about shell cordovan without thinking about Vietnam. You see, Ernie would stand around the store in those loafers-telling me stories about being a 19 year old infantry grunt-slogging through the jungle scared shitless one hundred percent of the time. He knew his number was coming up but he went back to the beach anyway-back to Ocean Drive and the lifeguard stand and he simply told his dad to come fetch him when he had to report. He told the story of seeing his dad in street clothes-walking up the beach to his stand. He knew his dad was there for one reason only-It was time to report for basic training.
By November Ernie was walking point somewhere in Southeast Asia. As I listened to his stories I realized how lucky I was-having been too young for this war. He told the story of loving the letters that his mom sent him that contained those little packets of moist towelettes from Kentucky Fried Chicken. He had written home telling her that the heat was really bad and that he could never get relief. Ernie said that those little handy wipe packets offered thirty seconds of liberation from the jungle. He’d wipe his face and the back of his neck with them-it was home-it was mom-in a little packet from Kentucky Fried Chicken. 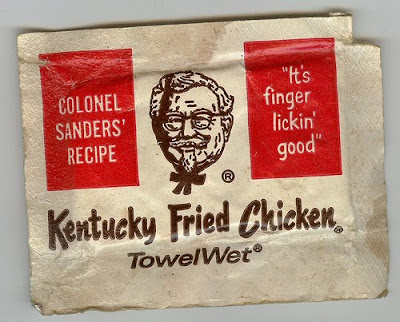 Ernie lasted less than a year before returning home. The good news is that he returned home physically and psychologically intact-but not before spending about a year in various Veterans hospitals. Ernie-shod in his translucently buffed shell cordovans told me about spreading his bedroll out and reveling in the mental foreplay and anticipation of how good the stolen small can of Coca-Cola was going to taste once he sat down for a rest. That’s the last thing he remembered about Vietnam. His next memory involved waking up in a hospital in Japan. He and his platoon were flanked by those cunning guys in black pajamas-sandals and AK 47’s. Ernie was softened up a bit before the ground attack with mortar shrapnel.

Today Ernie is pretty much retired. LFG and I saw him when we were home last month. He still has a patina and he still has the shell cordovan loafers. They will last a lifetime if you take care of them and no trad wardrobe would really be complete without a pair. They go for around a half grand a pair these days so start saving your money. 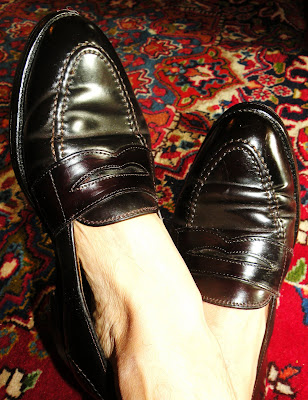 Sorry you're sick buddy! Chicken soup - the real stuff - is what will put your feathers shiny.

And speaking or shine - use spit! That's what got me though inspection in the Air Force (I never got gigged for my shoes) this was a lesson taught by my father - he was crazy about his shoes and taught me the same - and followed in his footsteps and bought at Barrie Ltd. right next door to J. Press in New Haven.

Get well soon! M&M was a great costume. We went historical. :-)

ADG - what a gentleman you are - and how I hope that my techies don't follow my reading history. Thank you so very much for such a flattering profile I hardly recognised myself as the harridan shrieky harpy who attempts to shoe-horn all those activities into one little life.

The Colonel wants you to come and visit for a bond over the Spy cartoons and baggy shorts - there are some wonderful desert photos you'd covet.

I mind rather that I will be condemned to producing edible little messes while you two do military strategy and smoking jackets.

So on second thoughts, stay where you are.

The jumper was stolen, not misplaced. There is some massaging of the truth going on there. Just saying.

Thank you for the link. I have only had time to read a few posts, but what a joy! Also love the Halloween
photos. I had all there of my daughters together this year to trick or treat with the grandsons, Once again I miss what you are living now.

Thanks everyone. Feeling better and off to Seattle.

Thanks so much for recommending Mon Avis, Mes Amis.

Today's post (Out of Africa, etc.) is brilliant. A joy to read, didn't want it to end.