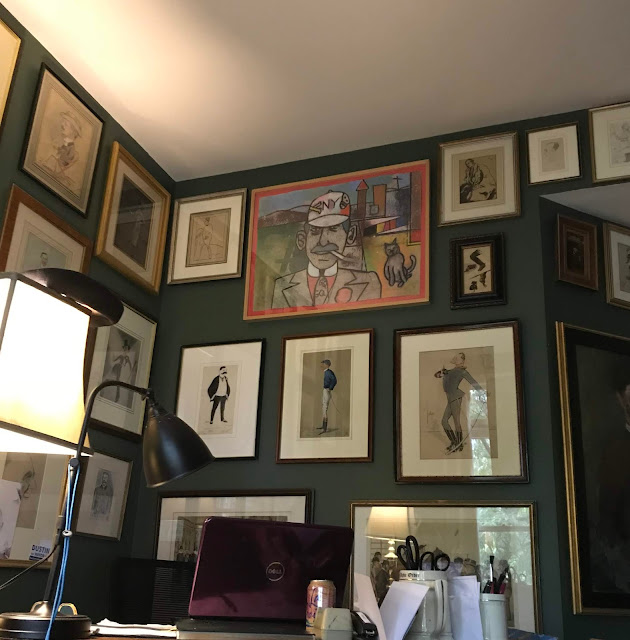 My Richard Merkin self portrait hangs above me as I cobble together this little update. I sent Carrie Haddad payments on it for about six months before it rolled in to Casa Minimus. It's one of my treasures.

And of course his great friend Alan Flusser has original Merkin artwork preening in various strategic locations in his shop and office. 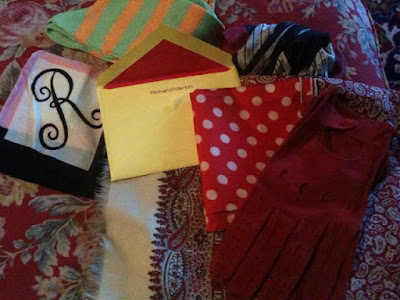 I loved Merkin and am pleased to have been one of his lucky correspondents and telephone pals. I got to know him a bit too late I'm afraid. We never had that face-to-face fellowship that I so crave when I encounter special people.

I wrote about Merkin from time to time but I couldn't be happier that Alan Flusser has now shared a story about his friendship with Richard. I'll offer you the first paragraph but then you must go over to Alan's Musings page and read its entirety. Here you go...

"Late in one afternoon in the fall of 1974 I was strolling up Madison Avenue when I spied a rather impressively dressed figure making his way towards me. Drawing closer, we both paused as to take each other in. I remember blurting out somewhat quizzically: “Richard Merkin?" To which he responded: “Alan Flusser?”  As if divinely arranged, our first encounter took place at the most sublime yet ironic of addresses, 346 Madison Avenue -- smack dab in front of Brooks Brothers...."

Wonderful post. I was introduced to Merkin’s inimitable work through the inimitable prose of George Frazier, gone these 45 years but never equaled. When I saw his lithograph Hiroshima available on eBay for an affordable price I was ecstatic at my good fortune. Ordered, received and still in the shipping tube. I lack only the 5 feet of linear wall space and the necessarily gargantuan frame to give it pride of place

Claire, thanks very much. I hope that all's been well with you.

Frazier, Merkin, Wolfe, Hitchens....so many of the sharp elbowed, jaunty (sans Hitchens...he was a beloved visual mess) boulevardiers are gone. And I don't see their successors. Congrats on the Merkin lithograph. Actually I think his posters were all seriographs which create "thicker", more robust colors. I snagged three of them about six years ago when a seller offloaded a gaggle of them on eBay. And all of them are non-standard sizes so buying a poster frame ain't much of an option unless you trim the poster. Custom framing is expensive.

Mister M-Lane, trusting that all is stable in your world. Sit down and cobble something and post it. That's what I'm trying to do. If I compare my output and style and topicality to my previous years' writing, I lose my motivation.

This is a great post. I first came across Merkin in the 1972 Christmas issue of Esquire; I had never seen anything like his style before and have been a huge fan since. Not an individual who could ever be emulated. And thank you for the Flusser tag. If you're interested, Duncan Hannah's recent book "20th Century Boy" recounts an afternoon spent in the company of Merkin as well as some other anecdotes.

How’d I miss this?

Had hoped to ask you this question via Tumblr, but they make you login now and I don't have an account.

In collecting Vanity Fair caricatures, have you come across any good sources of 1950s/1960s/1970s/1980s/1990s US or international political caricatures? I'm thinking the sort of thing you'd see in the NYRB or some or in DC waiting room magazines?

I have no idea where to start except maybe that print store off of M Street in Georgetown. And even then, need to educate myself.

MANY thanks if you have any thoughts, I enjoy your writing both at the old blog and on the Tumblr.

Stop not posting! We want you back, in all your fuzzy glory.