Greetings from the Fairmont in Seattle-again. Rolled in here after a 5.5 hour flight from New Jersey...middle seat...coach class. If I don't get the Swine after this week I'm probably ok for the long haul. Headwinds coming out here were strong. I just hope that the tailwinds going home will be just as strong. 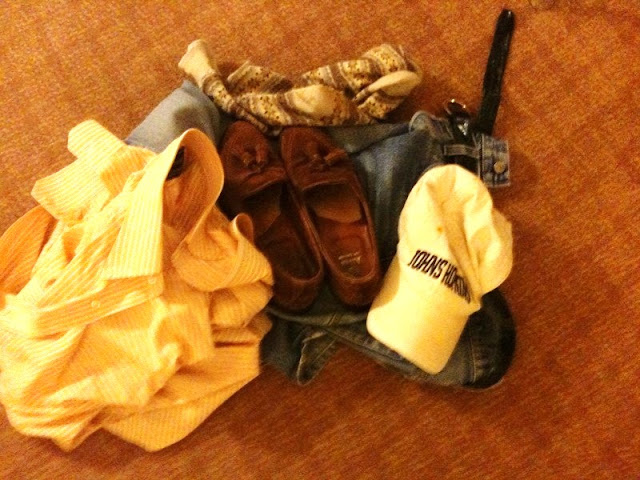 Have you ever been so tired that you just dropped your kit and fell into bed? 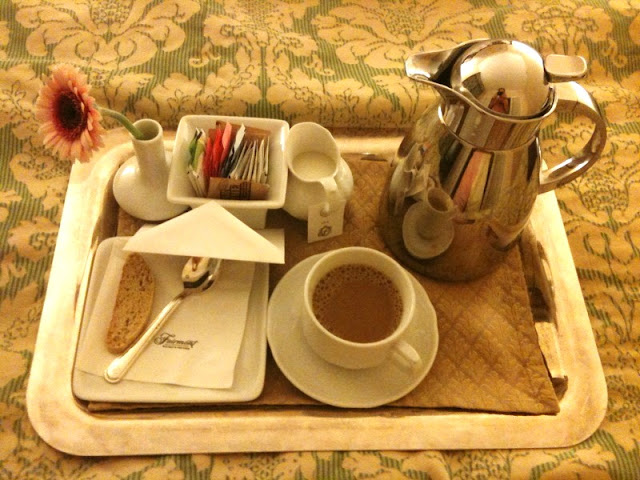 Ever done the East coast-West coast thing and awoke at 430 PST ready for coffee? The Fairmont knows about this phenomenon and thus offers room service 24-7. 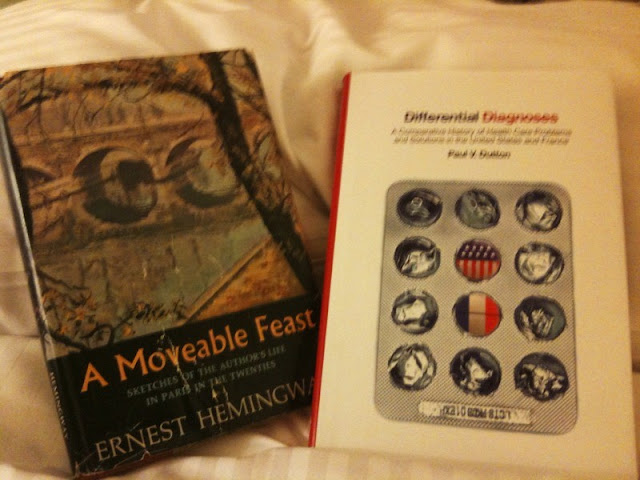 I always bring diversity to my reading queue when travelling. I knocked out a few pages of both my right and left brain books for this week’s travel…

Differential Diagnoses: A Comparative History of Health Care Problems and Solutions in the United States and France and Hemingway’s A Moveable Feast: Sketches from the Author’s Life in Paris in the Twenties. After reading a few pages involving comparative healthcare economies it quickly becomes time to read about Hemingway et al in Paris.

So Fall is upon us and I figured that an oldie abut summer time togs would be fun. You better have your Reds put away for the winter. (And Gail-Northern Cal....I promise that I didn't steam my blazer for hours at the Roosevelt!) 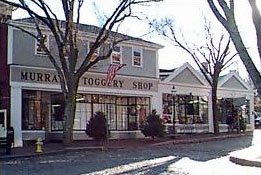 Ok folks. We’re gonna tackle a subject that is loaded with lore and forthwith, tethered by my rules. Now I love lore but am not much of a rules guy. I’ve had a brooding-low grade problem with authority that goes back to toddler-hood. I’m the poster child-passing all evidentiary muster that spanking is not efficacious. However, Nantucket Red in general andNantucket Reds particularly, must be rule bound. Now these are my rules and I’m sure that there will be those that take issue with one or two of them but that’s ok. This is my Code and you aren’t bound to it. However, if you don’t and I see you out and about-I’ll make fun of you. 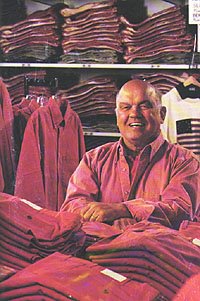 I remember my first pair-I got them long before I set foot on Nantucket and even longer before the internet. My friend here in Old Town; N.S. came home with them and I quickly called Murray’s to order mine. Murray’s has been peddling these sailcloth babies, made in Georgia by the way, since the 1940’s. I like the incongruence of their manufacture in an inelegant rural Georgia plant and the final destination being elegant-preppy-casual-salty New England. Mr. Phillip Murray above pictured is the gent that started it all. 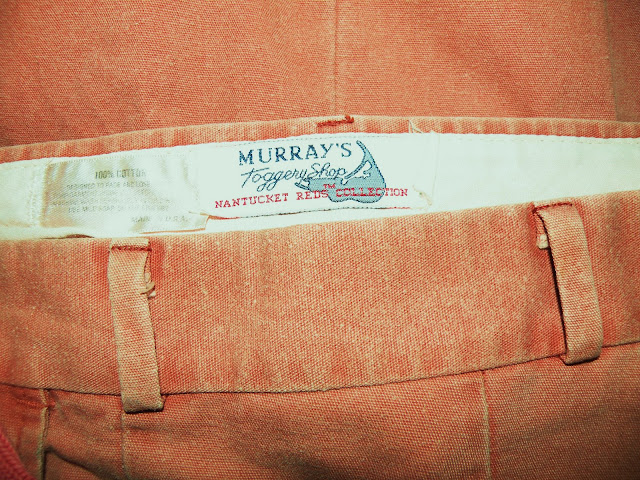 Rule Number One: The ONLY source of true-authentic Reds is Murray’s on Nantucket. Sure-you can find similar togs and analogous fabric but you’ll be a poseur if you aren’t willing to admit publicly that your ersatz trews are just that-ersatz. And by the way, that’s ok. I own some hybrids too but make certain that you own up to it. 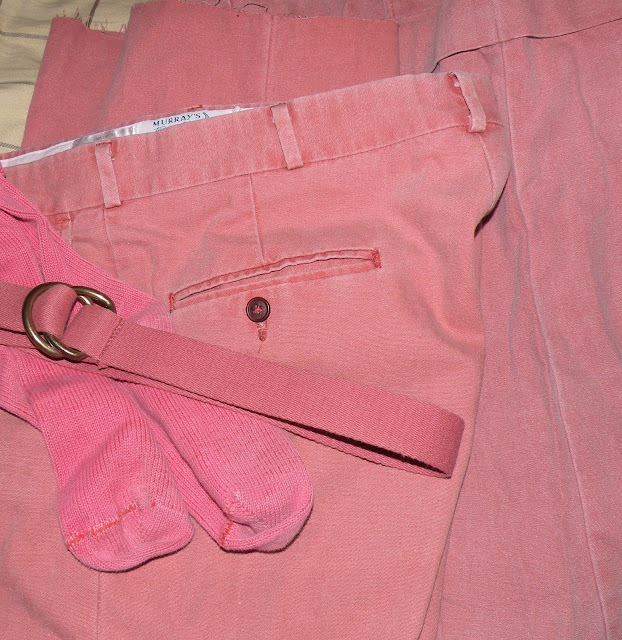 Rule Number Two: Only ONE Nantucket Red element may be worn at a time. Your rig must NEVER contain two-ever. As a matter of fact, if you break this rule you should be banned from wearing any Reds item ever again. This rule is so crucial that I’ve gotta add an amendment-after wearing even ONE Red item on a particular day, a one day NO REDS sabbatical must result. Please, avoid the “I’ve been to Nantucket once in my life and I bought every freakin’ thing I could find even loosely associated with Murray’s original Nantucket Red sailcloth pants and look-I have all of it on right now-as a matter of fact my wife and I just ordered a Nantucket Red Mini Cooper with Nantucket Red sailcloth upholstery and convertible top” visage. And this rule is coming from the redneck fuzzy dice guy who rarely practices restraint. The belt in the photo is from the Nobby Clothes Shop on Nantucket. Nice enough place. They'll sell you a pair of "Breton Reds". Don't.

Rule Number Three: You MUST allow your Nantucket Reds to fade over time. I know this is contradictory to my behavior of getting the “Jos.A.Bank” out of my patch madras sportcoat(wait till you see what our latest step was in that effort) but this is a different proposition. If you add a tad of bleach and wash them repeatedly they just don’t look the same as ones that have faded from a couple of seasons of regular washing. Your trou will scream…. “LOOK at me; I have on what I want you to believe are ten year old Nantucket Reds but really-I just got them in the mail yesterday!!” The shoes are Sperry-the shorts are from Brooks courtesy of LFG and the sweater is Ralph. All good pieces but rule bound as well. The sweater is a summer only ....just off the beach-sunburned-time for a cocktail covering.Only. 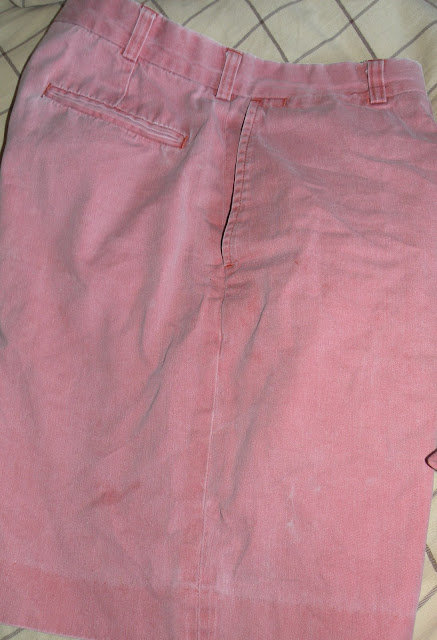 Be patient. Allow them to become what they’ll become. Like your children, their journey will be seasoned with wonderment, pride and a tinge of disappointment. Disappointment you say. How? It happens when you are at happy hour in Newport or similar environs and you see someone whose Reds are either older than yours or have faded differently. There’s beauty in the flaws and differences-just like in kids and adults for that matter. Don’t be jealous of what you don’t have. You've no idea what the owner of those Reds has gone or is going through. If you can snake his date though, that’s a different matter. Any of you guys remember date snaking? Any gals willing to admit that you’ve blown off a date midstream for a more exciting evening’s option? The shorts above were involved in date snaking in the early 1990's. Shut up. 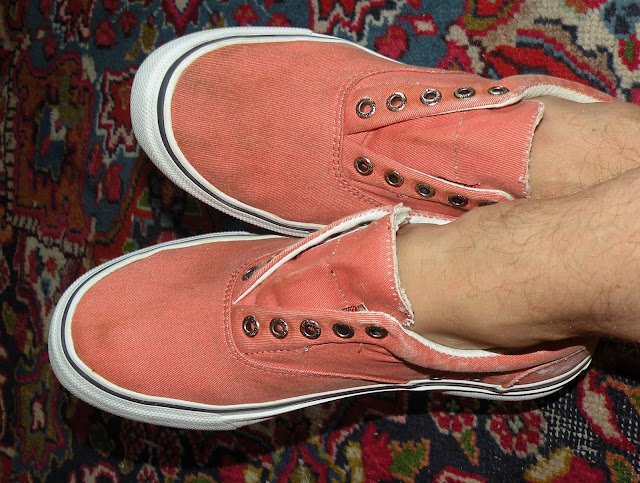 Rule Number Four: Put ‘em up after Labor Day-all of it-including the socks and the shoes and the belt and the sweater and the….whatever the hell else you bought. The shoes are good. The shoes worn with any other Red item-not good. 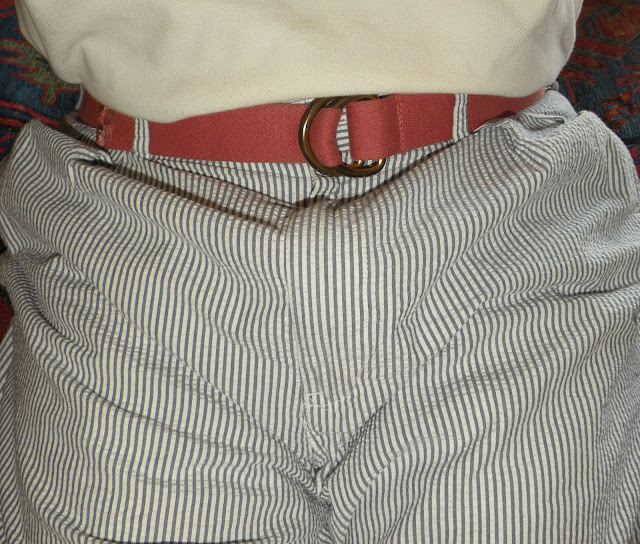 And finally-a suggestion-not a rule: I don’t rush the aging process but I do buy them one size too large and boil them one time in a big crawfish-crab type pot for about a half hour. No bleach-no soap. Nothing but boiling water. Why? It does a better job of getting the excess first round of sizing and dye out of the togs than machine washing them. It also shrinks them in toto appropriately for the requisite hemming and waist alteration as needed. Hem ‘em a little short with cuffs or if you are a Nantucket Redneck like me-have one pair cuffed and one pair frayed-no hem. Reds belt with seersucker-good. Reds belt with seersucker and the socks and shoes-you are blackballed. Banned for life.

Here's an example of one Reds component. Only one. Along with vintage patch mad and an old Champion sweatshirt and some gal I picked up. 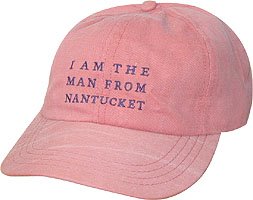 Neither you nor I "am the man from Nantucket". Pick up the hat-try it on-turn to your better half and smirk-then right before she slaps your ass into next week-put it back on the rack. Nothing good will come from you owning this hat.

This is all I have for today.

But I just wouldn't wear those red pants and stuff here in Northern California...

Where did you get the belt? P.S. You are a very bad influence - just got my first pair of suede loafers. Petigru's Ghost

I'm with you on the rules, but I have a question. A few years back my wife gave me a pair of embroidered castaway cords in a heavy weight and in Nntucket Red. What point of the year would you wear them?

"Be patient. Allow them to become what they’ll become. Like your children, their journey will be seasoned with wonderment, pride and a tinge of disappointment."

Don't tell ME you don't have the soul of a poet.

It takes a whole lotta washing before they soften up enough to wear comfortably, at least the women's.

A good friend started a line called Marblehead Greens (sold thru his store in....Marblehead, MA!) with the tag line, "We're sailors, they're whalers." Every year we have a Red + Green party at Christmas time and everyone breaks out the summer togs. Fun.

This should be canonized, somehow.

What sort of belt do you propose wearing with the shoes?

hehe! Great post...little late in the season though, or are you already thinking tanned ankles and the Carolina shag?

Keith...now go out and buy another pair of suede loafers. The belt came from the Nobby Clothes shop on Nantucket.

Brian...I would wear those cords WHENEVER my wife told me to!

David...thanks but the Canon of sartorial bullshit doesn't need me.

Victor...how the hell do you know about the Carolina shag?

the NR belt is also available at murray's too - get it from the original, not the copy cat nobby shop!

Great post...I have a sweatshirt from Murray's - one of my favorites.

Not in Northern California unless you really want to say, "I mean this." Almost everyone mitigates the traditional, pink pants look, once they have been here for a while. No needlepoint belts, no embroidered sea creatures. Someone would always be wondering, "Why is he wearing that?" Whereas I know that on the East Coast it's common enough to be understood.

Your blog keeps getting better and better! Your older articles are not as good as newer ones you have a lot more creativity and originality now. Keep it up!
And according to this article, I totally agree with your opinion, but only this time! :)

Sir, you are the real deal. If you had to choose one pair between cuffed and other what would it be? Pleats or flat? I bought a pair of LE shorts (unfortunately pleated) in "nantucket red" from Sears. Are these just too heinous to even qualify as hybrids? Perhaps I will sell my plasma for the real McCoys. Did you by any chance spend anytime around the Hampton Yacht Club (Hampton, VA) during the late '70s and early '80s ? I grew up around the corner.

Hilton...man! I never pay much attention to comments from this far back! Flat for me...to answer your question. I've never been to Hampton Va. in my life...originally from South Carolina.

Brooks Brothers are just as genuine and acceptable as Murrays...

AnonymousBrooksBrothers...sorry baloney breath. If they don't come from Murrays, they are fake.

Where can I get those red sperry cvo's? Gotta have'em

this is unsophisticated claptrap. You seem better suited to sports-betting advice than fashion

No shit? Seems to me that your assignment of my impertinence to the trash heap of unsophisticated claptrap would equally apply to sports betting. Send me a link to your blog. You p_ssy.