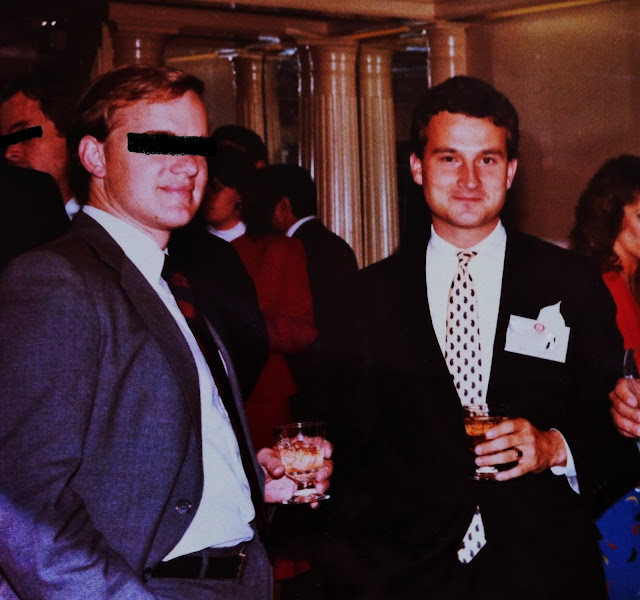 Julie Hertling still makes trousers in Brooklyn. I worry that after Hertling and Martin Greenfield move on, the evaporative remnants of garment making in NYC will truly and forever be nothing more than ghosts. I was walking on Seventh Avenue the other day and a worker was strolling an empty garment rack across the street. A rather accurate metaphor of Seventh Avenue today. When I lived up there in the late 1980’s you could still see garmentos schlepping fully-loaded tumescent rolling carriages of garments through the streets. As my textile supply chain little brother aptly posits… “We’ve exported all of our manufacturing economy to China.” Sad.
But in 1985 Hertling still made coats and trousers—and I bought them. Mark Shale in Atlanta…before they went disco…Britains in Columbia South Carolina and Britches of Georgetowne…in D.C. … before they just rolled over and groaned the reality of Washington being too stupid to care about style…all did private label Hertling. The goods were tasty and styled nicely and for a kid just getting career traction, affordable versus Polo and other high ticket options. 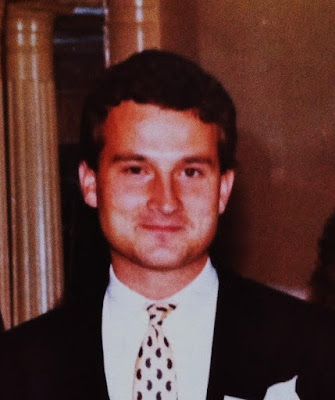 So here I am, back in N.J. for some advanced training. I remember having conjunctivitis in my right eye the entire week of this training session. The eye-drops burned in a good way. Anyone know what I mean by that? I also remember the stress being almost unbearable during these training summits. The Swiss pharma that I worked for was IBM-ish in its orientation to corporate citizenship. We had tests every morning and if you made less than ninety, your ass was on a plane home. And dress shirts? White-white-white. Anything else on the corporate campus and you risked career suicide. This was before PowerPoint became the crutch of organizational poseurs and sycophants but methinks the dynamic would have been the same. I saw careers made or broken on the back of one freakin’ presentation.
I’m better for my thirteen year journey with said Swiss-Prussian-Hierarchical-Paternal company. Looking back though, through the lens of my authority-defying self, I wonder how I navigated so successfully through those years. No,;I do know how I did it. I was competent, well thought of, in possession of a middle-class orientation to work and achievement and buoyed by great mentors.
I used to comb all of the curl out of my side parted hair back then. Company men didn’t have untamed curly hair and they didn’t wear bracelets. After a few more years of fighting the curl-gods every morning, I just did a Britches of Georgetown and rolled over and groaned the reality of curly hair. I’d just like to have it all back now. 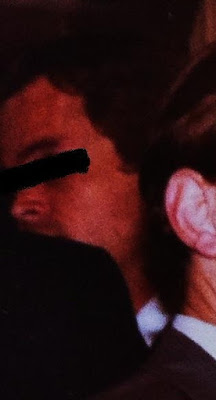 I’ve blacked out the eyes of a couple of old colleagues. This cat hated my ass. If you believe in or stand strongly for certain things, somewhere along the way you’ll encounter folks who believe differently than you and they will take it personally. I can name only two people in my thirteen year pharma career who I believe would genuinely liked to have seen me experience ill fate. Not a bad track record for someone who wasn’t an ass-kisser…least ways I think so. Shut up. I’ll admit that I may be delusional and egotistical but I’ve long since been convinced that this turd was jealous of me. And if he’d ever been in a situation of authority over me, I’d have been out of said company faster than a set of rims at a Puff Daddy concert. 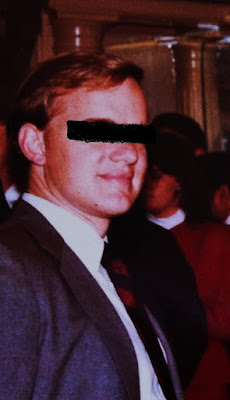 The opposite is true for this fine fella. A very conscientious colleague from Northern California and a man who within a few years after this photo, moved on to a very well known U.S. based pharma organization. The reason that I’ve blackened out his eyes has nothing to do with how I regard him. He is a man of unimpeachable integrity. Unimpeachable as evidenced by his whistle-blowing tactics at said U.S. legacy large pharma monster. He refused to implement strategies that were clearly counter to approved product usage and devoid of clinical proof of said usage. He also dropped a dime over at the Justice Department in tandem with refusing to implement said strategies. His reward? Thirty four million tax free dollars. And I say good on him for his actions. I’d give half of that money to charity if it had been me. Seventeen million shrouded in good karma seems like a fair deal.
Onward. With seventeen thousand…shrouded in shell cordovan.
ADG, II
Posted by ADG at 8:22 PM

Man, I wish I had some pictures of my yaller-tie-wearing salad days. You're fortunate in that respect, as you are with your past associations.

(I suffer from the same malady. I'm just a couple years younger than ADG, with wrinkles and graying hair--and I still get carded!)

34 million? Charitable giving, yes--but I'd be very, very careful where that moolah went. I'd also invest it so that I had more to give later. Capitalist philanthropy for me!

But not in green.

You have the good fortune to look more handsome as you age. (And, you've remained trim, damn you.)

I miss the old pre-roll over and groan Britches. Still have a number of nice pieces from them; however, they no longer fit.

It's called Herblock's Law (after the editorial cartoonist): if it's real good and YOU like it, they'll quit making it.

Hertling fit me very nicely, and it was sold by Ivey's, a fine old line dept. store founded here in Charlotte, who had killer sales and a staff of long term pros in the men's dept.

SO OF COURSE, Hertling quits making suits, and Dillard's buys Ivey's. I wore my three Hertlings until they just weren't presentable anymore, and still miss that "perfect" grey one after fifteen years

A few guys clearly never liked me but it never occurred to me that it was because they were jealous. Now I feel much better. Thanks!

Lovely to finally hear what you are mainly about.

(Yeah yeah..... and you look good and you have nice clothes.....but now you have shown yourself to be a mensch)

A pretty good feeling to "survive" those colleagues who expended years of energy trying hurt us. In my 30+ years as a teacher, I only had 2 {that I knew about}. But, whew, they had the spite, collusion, and vindictiveness of 200.

Jealousy plays a big part in business - - it's the father of GREED. I'm finally at an age where someones jealously makes me laugh. I'm have no tolerance for corporate game playing. I see younger managers trying like hell to make it up the corporate ladder - nose firmly planted in their bosses ass . If they could just see themselves.

You do get more handsome as time goes by -- your Daddy passed down some good genes!

Half!!! Correct me if I'm wrong but, I believe 10% 'tis the price of admission and a good seat in heaven. Always the show off. I'd of course tithe big to the FOBP...XXOO

Ah, Britains. I can only recall two arguments EVER with my college roommate. One of them was in 1982 when I paid $100 for a gorgeous dress from Britains. I walked away from it when she was shopping with me but went back later for it. I couldn't stop thinking about it. Some people just like to kill bliss...but I still love her!

My parents bought me my first post college suit from the Britches of Georgetown in Montgomery Mall. I can remember that shopping trip vividly (although it was over twenty years ago). That suit was the perfect conservative choice - Navy with plain front, cuffed pants. In spite of ping, pong weight gain I can still wear that suit.

I have lots of fun with old reps, colleagues and clients from my corporate badvertising days who come to my classes. I sort of hate to admit it, but when the cat who hated MY ass showed up, I took quick inventory of his strong points and tailored the class in the opposite direction. I'll take the karma, because years of my misery were wiped out in one hour. But the weird thing is, he kept coming back.

Thanks for the nice comments everyone. And yoga teacher....."I took quick inventory of his strong points and tailored the class in the opposite direction."