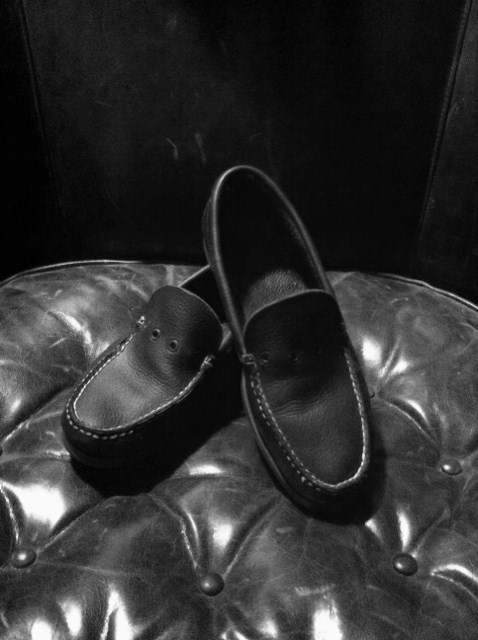 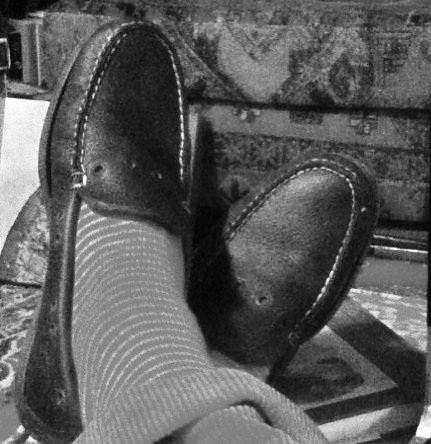 The brainchild of collaborists McNairy, Browne, Muytjens and Darnell Burgess, the LLVDH screams repurposed urban edge. “Why not redefine shit in a way that allows sweat shops in fourth world countries to knock out these babies for next to nothing” posits collaborative team spokesperson Burgess. “I mean come on, everybody else is doing it. Alls we did was take a few L.L. Bean favorites, loved by white people and that used to be made in the States; trash talk the product in a Kerouac-ish, loathsome way, sling it around for fifteen minutes by the proverbial knockers and BAM… you’ve got profit margins out the heinie.  Swathe it in vintage-y looking wrappings and an assload of adjectives/adverbs and run like a mo-fo.” 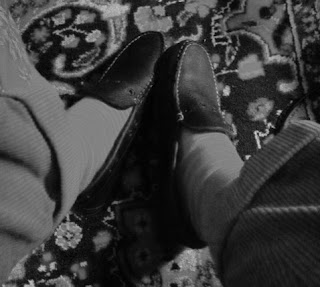 Burgess went on to share that the inspiration for the LLVDH was bi-sourced courtesy of McNairy’s collection of black and white photographs of stripped down and abandoned cars on the Cross Bronx Expressway as well as Browne’s and Muytjens’ love for the Lynyrd Skynyrd song The Ballad of Curtis Lowe. Andy Spade, for fifteen percent of expected gross sales vetted the inspiration—after Kate granted permission. 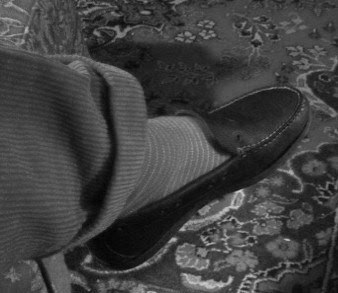 Burgess continues…“It’s easy to see the abandoned stripped down car thang in the shoe…no doubt. But the Curtis Lowe energy is much more ethereal and risky. Dig the lyrics—you’ll make the connection and I’m sure you’ll conclude that our collaboration was nothing short of hugely damn courageous. Curtis Lowe was a poor black man who had swollen feet due to gout and Type I diabetes.” A brooding McNairy finally added “It’s all about the adverbs and adjectives man.” Browne, through a spokesperson stated that the LLVDH was a "thinking man's shoe...I mean come on, think about it." 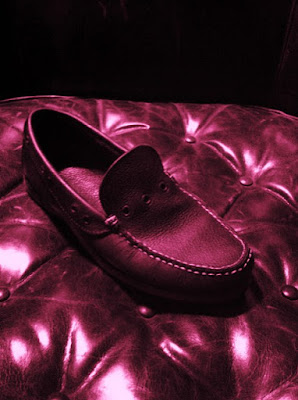 The LLVDH will be available March 13, 2011 in small batch, artisanal quantities. This handcrafted testament to high margin knock off reinterpretiveness carries an MSRP of $375.00. If you require any rationale for the price point, then you aren't cool enough to wear them. As a matter of fact, if you have to ask anything, you are stupid.
Onward. Adjectively Adverbial.
ADG II
Posted by ADG at 8:52 PM

So are you their worst nightmare or their fondest dream? I don't know. I suppose I shouldn't care, since I am laughing and that's always good. This makes me want to get really ornery and get a pair for my father. With this post typed out on my old Smith Corona as a card:).

Man, that is one well-curated pair of shoes.

Dang. Now I sort of wish mine hadn't been eaten by the stupid golden retriever owned by the family I nannied for back in the 80s before moving to WDC. I was so miffed I didnt buy another pair. Am I a candidate for the nearly $400 pair?!?

Hey, I invented that shoe one night after some pharmaceutical inspiration...I want a cut.

But I'll settle for a few replays of "Curtis Lowe", one of my favorites.

Bravo, spot on. Love the tongue in cheek post. Glad to see I'm not the only one who is bewildered by the stupidity of people buying the Andy Spade, et al regurgitations mainstream items, only at MUCH higher price points...because they're now somehow even more cool...uggh, give me a freakin' break!!

Well, I was kinda lost on the shoe thing, but when I saw the bottles on the Curtis Lowe video I wanted to shoot them! Not sure if that urge was from your last post's shoot 'em & eat 'em comments, or from my kiddo's choice for tonight's mom/daughter movie nite: "Point Break."

MainLiner...ain't nothing wrong with naked.

Yogista...I can understand your "lost" ... this one's deep! namaste.

AnonSpadeReMainstreamer...I'm a hypocrite on this issue. Ralph Lauren is one of my faves. I just think some of these latest reinterpration guys are doing shoddy work for breathtaking sums.

NCJackCut....take it up with those guys.

LPC...Prunella, glad you chuckled. BTW, I named a county after you in a post the other day.

Good post on a routine Mad Ave gambit that is entirely worthy of parody.

You can see a piece of the same thing with the plethora of designer handbags with prices that don't reflect the fact that they're now mostly trademark patterned cloth rather than leather.

Add that cost/quality factor to a packaged appeal about funky you turning prep on its head (generated in an ad office rather than real urban streets...), and the emperor isn't just naked, he's giving you the finger.

Can these still be worn with the little white tennis socks?

RHW...yes but only after the committee of cool decides that you can.

CMac...and if the emperor can get close enough to you, he'd but another finger in your... ear.

For a second, I thought I had accidentally made my way to ACL.

Oy but.... I did see a pair of high heeled bean boots for campus princesses this fall from Tommy Hillfigger, no irony or tongue in cheek intended and I suppose someone bought them because they aren't showing up at TJ Maxx.

I do love Quoddy.

LongWang...and Quoddy's are worth every penny. They're making me a pair right now.

ChuckieHatter...sit tight. They'll be at TJ Maxx in another month or so.

So, uhhh, how ya gonna get the laces threaded back into the shoe? Or wait...are you going to keep them bare, neat, clean...what's the word... "reinterpreted"? YOU are a mad man!!!

AnonLaces...consider this old pair as having had the "full brazilian"...or as Christopher Hitchens characterized his experience... "back, sack and crack."

Nice shoe but there does seem to be a little 'beef roll' rearing its ugly head - the beef roll police have been duly notified. Whether they take action is up to them, I'm stayin on the side-line.

PS What's with the carpet shots in black and white? You're taking all of the fun out of your posts dambit gumby!

My thoughts exactly. A Krystal remora.

Breaking news from J.Peterman Anti-Recession Sale, this just in...

"The Double Breasted Green Blazer (No. 2864) is in a wool and cotton blend that is luxuriously soft. Two front besom pockets. In the perfect mélange hunter green — a mix of different colors of yarns knit together to create a heathered effect; functional 4-button cuffs...."

What a way to start the year. I glad I wear trad/prep stuff because it is what I have always worn and not because of some style consideration. Because I don't understand any that mumbo jumbo. I sure don't understand the Ballad of Curtis Lowe tie in. I thought that was only popular with a very narrow segment of the population(myself included) who don't spend that kind of money on kick around shoes. Too convoluted for me.

It's a shame that Bean no longer resoles their camp mocs for customers. My 3-year-old pair have holes worn all the way through the soles and I'm not sure where to go to get them resoled. Bean is also much help in that department as the place they recommended seems to no longer be in business.

"Too convoluted for me."

Dear ADG,
after having followed one of your sartorial inspirations A.F. "of the give a shit bus and boarded the Fuzzy Dice Express"(copyright ADG), how do you recall this next step of removing your laces?
All the best from Vienna,
Lacroix

Signature. What a lot of jobby. Thankfully there are still a few lone classics left in the 'regular' Bean catalogues.

Nice to read someone cutting through the idiocy.

Weeeeejun..."Signature"...damn, I forgot to use that one.

Lacroix...I had to first determine if you were cheering me from Vienna Virginia or Vienna Austria. Suffice it to say that my answers would be totally different. So my answer to you is that the lace removal tactic with these old, ill fitting moccasins is an attenuated, minimalist example of fuzziness. My Vienna Virginia answer would have been much more condescending!

I checked out your blog and will add it to my list. The navy blue suede bit loafers are fuzzily spot on. Stunning. And I like the updated toe box.

Memphis88...I had a guy in NJ that resoled my first pair three times...till there was not enough leather to stitch the new rubber bottoms to.

JRC...Mission Accomplished! The creators of the LLVDH WANT you to be confused. But just confused enough to follow their direction. It's how communism got started. Come to think of it, same thing spawned the women's movement and the abolishment of the Poll Tax.

Lisa/Flow...ain't no DELIBERATE beef roll on any LL Bean Camp Moc. There's always a little bit of roll on any norwegian/camp moc esque construct 'cause they have to gather and stitch that intersection somehow. And finally, bring the Beef Roll Police ON! I will kick their collective asses so bad that when they wake up, their shoes and socks will be back in style.

As I stated before, I will be on the side-lines regarding beef-roll police especially now that you've thrown down the gauntlet of a smack-down. I'm pouring peanuts in my bottle of coke and settling down in my chair for the show. It'll be good and I know which side I'm placing my bet.

Lisa...I will beat the Roll Police like borrowed mules. Rumor has it that they're already practicing their yelping and howling and crying for momma an 'em.

Thanks for your answer. Interssting america-centric view on the virginia/austria thing. So thank God i wrote this from old Europe Vienna ...

Lacroix...indeed. Vienna Austria is a jewel. Vienna Virginia is a suburb.