“Do as I say, not as I do”…seems like I heard my mama say something similar when I was a young’un. It didn’t sit well with me back then but I’m gonna ask that you follow mama’s advice. 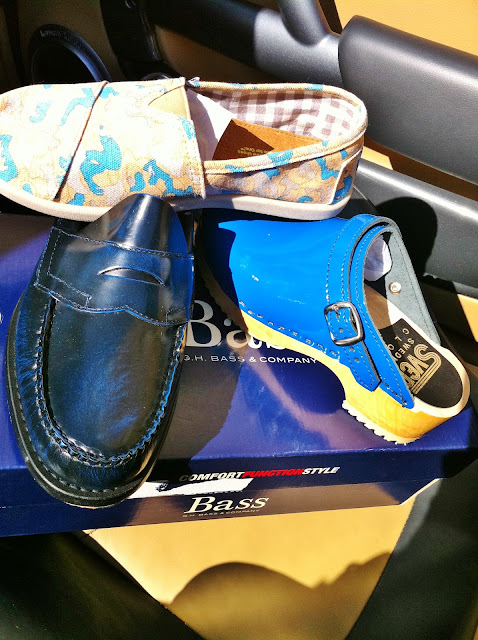 It was a big day at the mailbox yesterday—shoe wise. LFG’s back to school shoes rolled in and so did my 75th Anniversary Bass Navy Blue Weejuns. 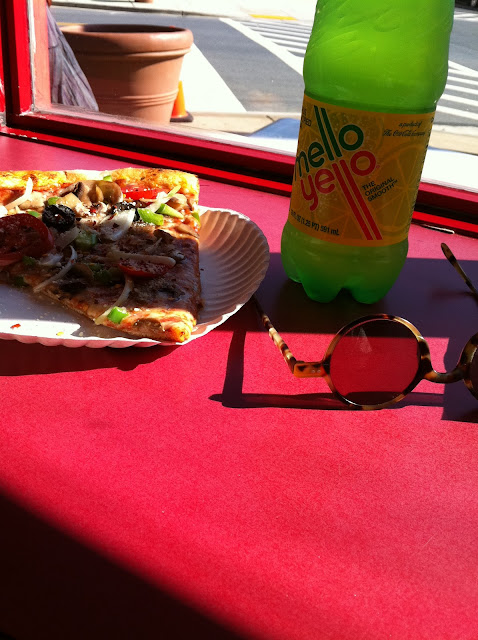 I scooted up to Chevy Chase and handed LFG her shoes…it’s not my LFG weekend coming up and she shouldn't have to wait two weeks for her shoes. I grabbed me a Mello Yello and a slice before heading back to Old Town. I know, I know...I'm living a dream. 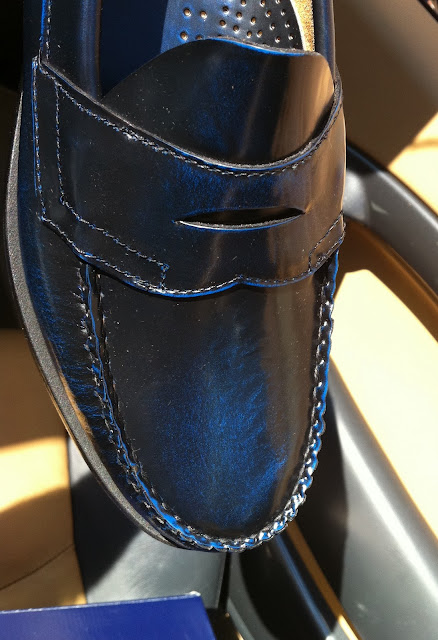 The new blues are a solid value for the money. But they ain't the Weejuns of thirty years ago. My other blues were made in Maine. These are made by the hard workers in El Salvador or somewhere approximate. Look at the dodgy pigmentation…kinda like the atmospheric or oceanic swirls on the Weather Channel. 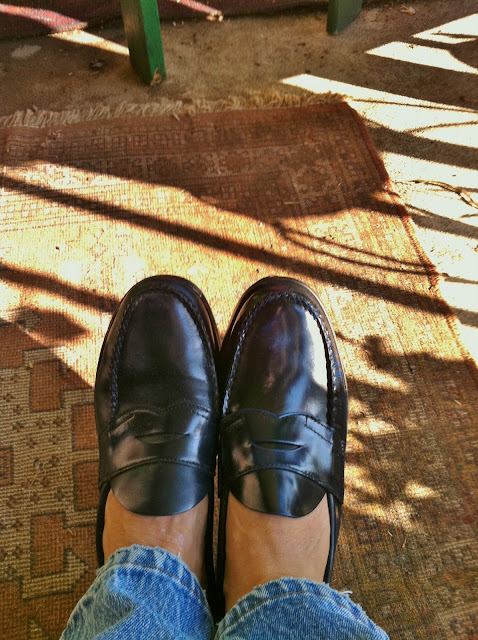 Leather? Yes. But coated with that same shite that my great aunt Edith permanently and hermetically sealed her living room furniture in. I hated going to Aunt Edith’s in Kingstree. She was mean and she smelled funny. 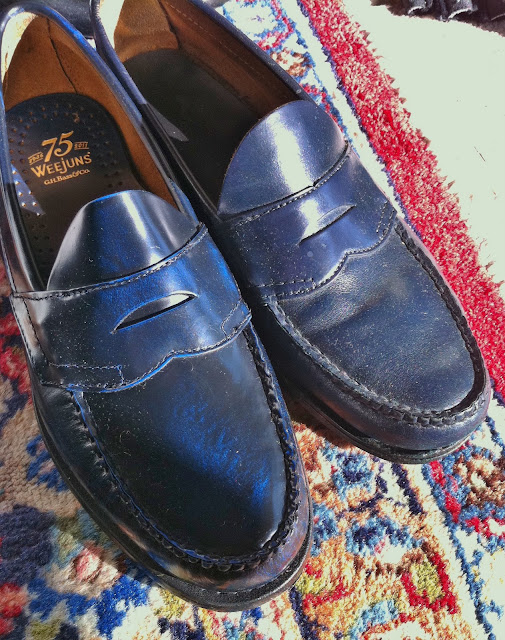 The difference is obvious. 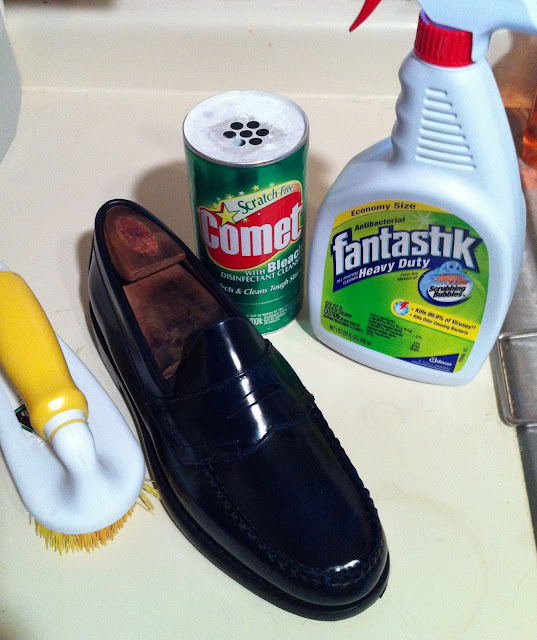 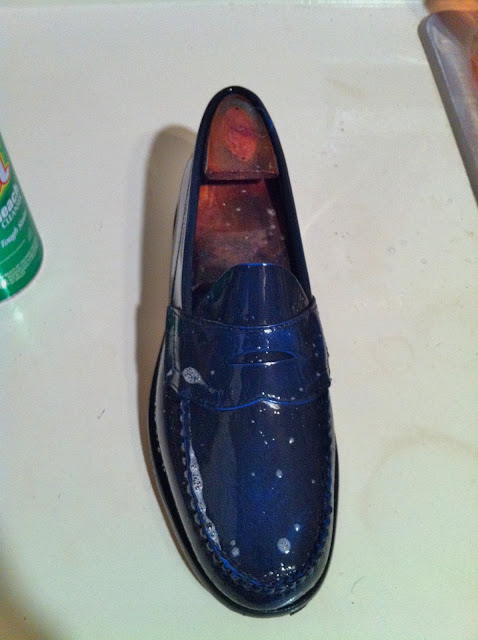 Now when I did the Bean babies, I sceeched a bunch of Fantastic on the shoe and then powdered it like a baby’s heine. Then another sceech of Fantastic. Sounds barbaric I know but remember-you're fightin' a fiberglass coating. 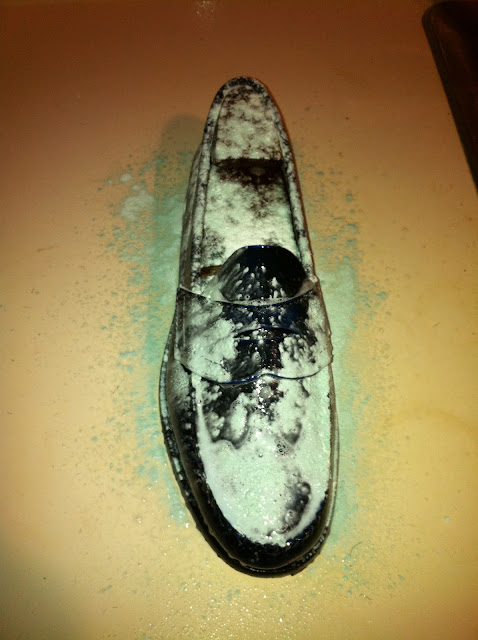 A gentle work around with a brush and the plastic coating drifts away. Saddle soap. Overnight drying and then some polish and BAM! Perfecto. 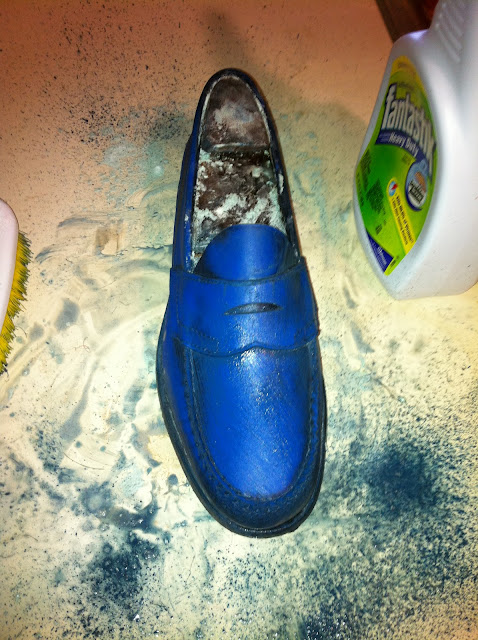 But in this case, something went wrong. To say that these aren’t really colorfast is an understatement. 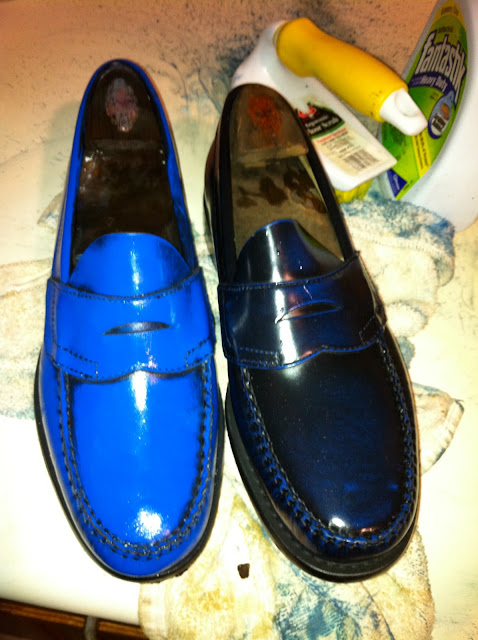 There ain’t no re-do on this process so I’ve gotta go ahead and do the other one. 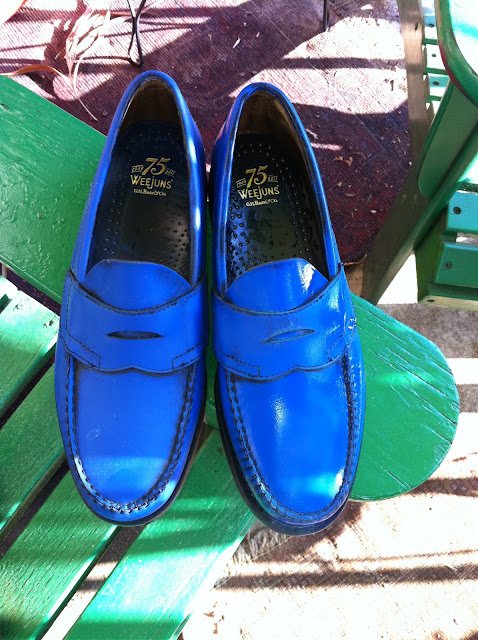 Go ahead and admit it--I know I did. You’ve always wanted a pair of Royal Blue Weejuns. 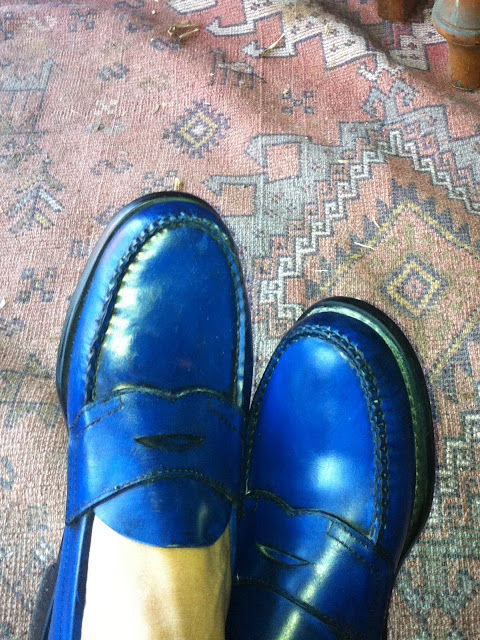 And for those of you who don’t. I’d recommend just getting your 75th Anniversary Blue Weejuns slightly moistened with Fantastic. Skip the Comet and for certain, the brush. Wipe ‘em off and let ‘em roll. Unless you want to join the ADG Royal Blue Cadet Corps.
Shut up. If I’ve ever meant it, I mean it now. Shut up. Shut up. Shut up.
ADG II
Posted by ADG at 8:58 PM

Email ThisBlogThis!Share to TwitterShare to FacebookShare to Pinterest
Labels: Weejuns

Navy blue leather dye. This has to be fixable.

Manifdest...nope. That shit looks like spray paint. They'll be fine after I wear em and dirty em up a bit.

Now you and LFG have matching electric blue shoes.

If this is your definition of sporadic, I like it.

When we have our inevitable Belgian Shoe and cocktails meet in the city, promise me you'll be wearing those. I won't have to do crunches for the next whole WEEK! XXOO

ps...Babe's gonna have to break his in the old fashioned way. Either the bicycle foot drag or a muddy kegger cuz those things ain't gettin' near the Tidy Bowl on my watch!

Before you tackle the other shoe, try the rubbing alc and cotton ball trick. See if it cuts the mustard. Report back, and then do it your way.

Not so bad. Slip the name Mark McNairy or Duckie Brown in there and you can turn around and peddle these for $300.

Honestly, if anyone can pull them off, you can.

ToadyBoy...too late. I've done em bofe. And your Marlborough Club print went in the mail today. Frame it and let me see the result or I'm a come get it back.

I received mine today but had to send them back for exchange as they seemed to run small.....maybe I'll order up another pair and give one pair your treatment.....can't deny the fuzz factor on royal blue weejuns.

Scottie!!! I chuckled at the McNairy but howled at the Ducky comment. Brilliant ... Brilliant. At $300.00 BAM.

Indigo, Indigo, Indigo Indigo
Cobalt and Ultramarine
Lapis and Sapphire and Robins Egg too
And Navy- You know what I mean

Turquoise, cerulean, aqua and Sky
Swimming Pool Ocean and Ink
Plateye, Bar Harbor and Gainsborough, now, and Cornflower, what do you think?

Royal petroleum, federal and slate
Granite and denim and steel
Smokey and hazy electric and great,
But mama said we don't mess with teal...
She said son, stay away from that teal

And she might have worried a little about weejun as a shade of blue, too...

All right yawlz. I'll wait a bit to see what you try and then let you know what I try and will pix the results. It's fun.

Lord have mercy! I think I would have cried. C' mon...admit it man, you had to have shed a tear or two. However, I don't know anyone else who could wear that shade of blue in a shoe, other than you and I mean that in the most respectful and sincere way.
Wait...I forgot you told us to shut up. Sorry.

Better yet, create your own line.

Those are almost as nice as your green shoes.

Next time, rubbing alcohol or acetone and a cotton ball.

Tucker...yep. It's a lesson I've now learned the hardway. A dab of acetone or a splash of the old rubbing alcohol would have calmed things down. I don't have Photoshop but I did tweak the exposure here and there on a couple of the pics to help make my sad, sad point.

Fogey Young One...mess with me and I'll send these to you and make you wear them.

Susan...I shed no tears...because I still have my original navy blue Weejuns.

willie...get your ass up to Winnsboro and go to work.

Wow, those light blue weejuns you created yourself would so make you rich if youd own an italian shoe-shop;-)
Just found out, you still have the blog. So glad, the tumblr wasnt really my kind of thing.
Your blog is really creating quality time for me each day. thanks!
Have a good weekend

Those would kill at a Citadel football game this fall. I will try the alcohol/Fantastik trick this weekend. Heading to a Steeplechase at Morven Park in Leesburg Saturday with the family so it is a perfect time to break 'em in hanging out on the rail with a cocktail in my Tervis tumbler.

Hysterical...Bob's arrived today..thanks to Alice's post...thanks for the laugh!! Ginny

Folks, be careful of the acetone. It takes the Navy blue top coat (sealant?) right off and you may end up with the Tar Heel Blue version.

You ought to post those distressed blue Weejuns for sale on the Yahoo Japan auction site. They love their Ivy cosplay over there.

Well, shit. Do you think taking them in to have them professionally dyed might help?

I've never laughed so hard in all my life, even showed them to the mister. But ADG, who knows, maybe you'll start a style trend.

I like what you've done to your shoes. I like that blue and I like it that no one else will have shoes like yours. Besides, they look so soft. I don't know much about the brand you bought, so maybe you were hoping to impress and now you can't in the way you'd hoped, but personally I think they look nice. I think you'll grow to love these shoes.

Looks like they've dropped the price on these by $20. Also note the name of the color from the Piperlime website, maybe that should have been a clue:

The update...I've buried them in a large terracotta planter...under very rich organic compost. I'll unearth them in late April 2012 and will then decide the next best course for these babies.

In a planter? Patina. Guaranteed.

And by 'acetone' I meant nail polish remover.

Have you considered putting outlandish yellow rubber soles on them? Then you could claim they were the Mark McNairy extry-special sooper-dooper 75th anniversary collaboration MEGA Weejuns.

And I would wear your lovely blue shoes--if I were in high school again and purposely dressing like a tool again.

I just got a pair of these and thought of your blog.

Well, fuzzy is as fuzzy does right?. I think they're actually quite brilliant, even if they are in an unintended yet currently popular way. I found a pair of blue suede Weejuns not too long ago at a thrift shop. They're nicely made and look a bit like your old ones, but were brand spanking new. And of course without all that shellackery they dunk them in nowadays.