You may know the old joke…“Why don’t Baptists have sex standing up? Someone may think they’re dancing.” Vertical love making is a tricky endeavor and I’ve pretty much given it up. Dancing too. And it’s a shame really ‘cause everybody knows that there are three things that Southern rednecks love to do…f____, fight and fast-dance. 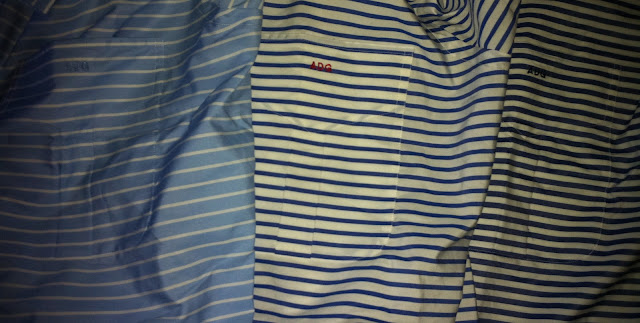 Verticality…Horizontaciousness. Sin is sin no matter what the latty-longy orientation might be. And my latest sin was horizontal in nature. 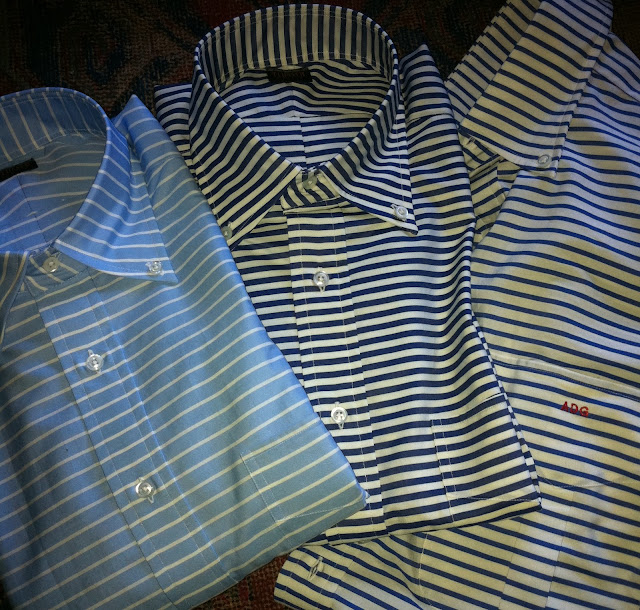 The gateway drugs to this level of sartorial malfeasance have long since been consumed but that’s not news to anyone reading this load. Blazer striped shirts en vertical are fully represented in my lineup. But then—surprise I know—the Devil flung a craving on me. A horizontal one. 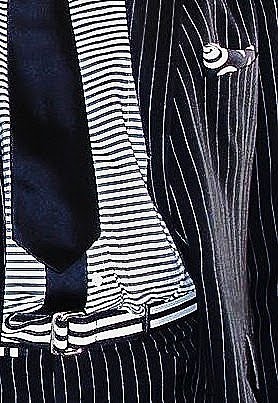 So I skulked into the confessional chamber and had a word with Father Flusser. It had been, I don’t know, at least a month since my since my last purge with the Father. Fluss-counsel always leaves me awash in high price-point redemption. And it makes no difference that my confessor orbits in a Hebrew-Buddhist galaxy. Matter of fact, in this case, it’s probably a good thang. That’s Father Fluss above…in about as fuzzy a contest of verti-hori as one could ever imagine. 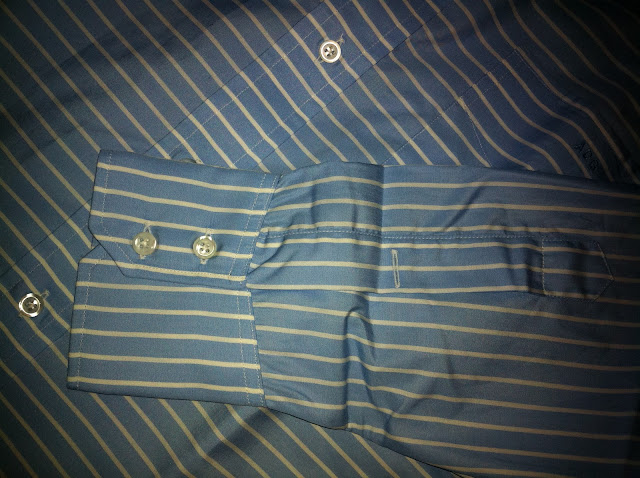 God lives in the details. And in my decades old ape-mimic strategy of seeing Alan wearing something that I admire, I’ve been requesting his “cowboy cuff” for some time now. 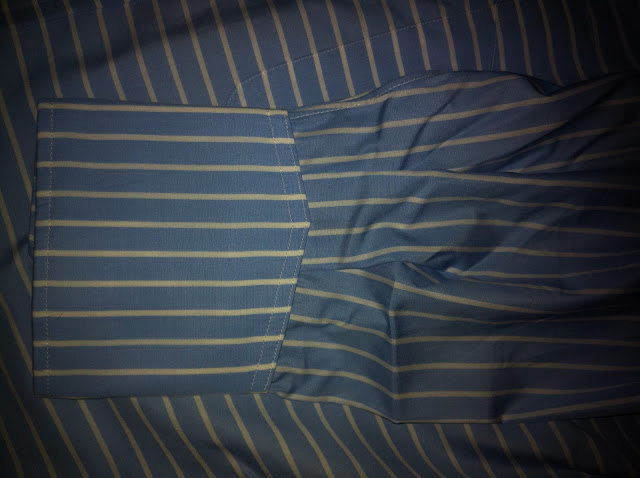 The perpendicularity of its placket-ated sidewaysness doesn’t convey in photos. 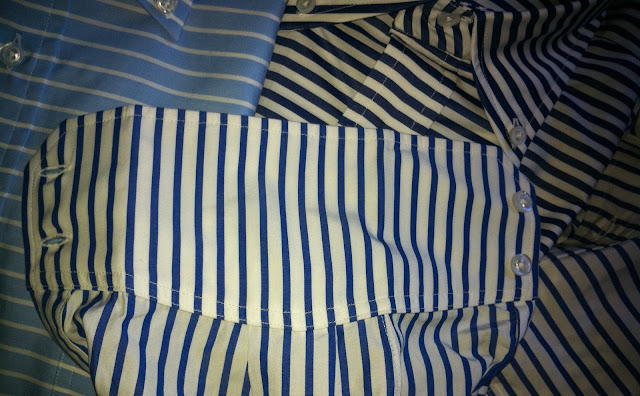 You need to see it starched and on my arm to appreciate the tubular conicality of its fuzziness. Shut the ___ up. 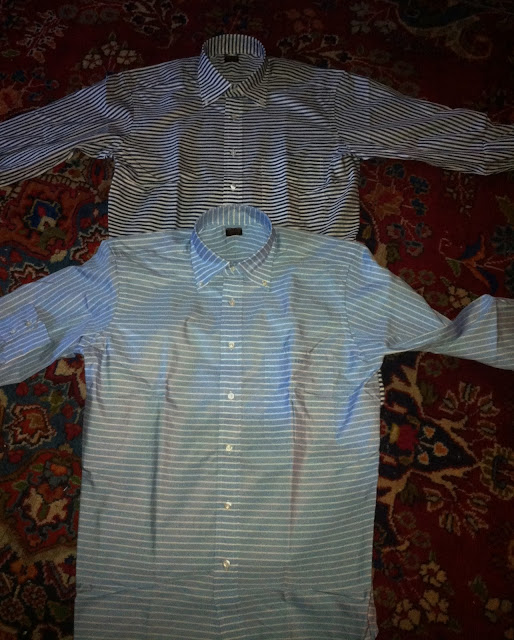 Blasphemy I know but these fresh from the box babies look a bit like the big ole Christ the Redeemer statue in Rio. Blasphemous and silly now that I think of it…because all believers know that gettin’ to the Big House in the Sky has nothing to do with shirt stripes. Shell Cordovan is the ticket. 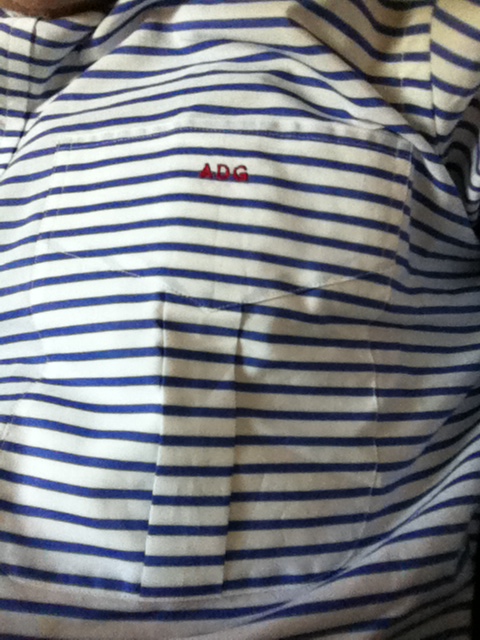 I’m amused by your assumption that I wouldn’t tart these babies up further with a monogram. One friend consistently asserts that any man who places visible initials on a garment is immediately one of no consequence. A midnight buffet, all inclusive resort going, pyramid-network marketing…networker. ADG. 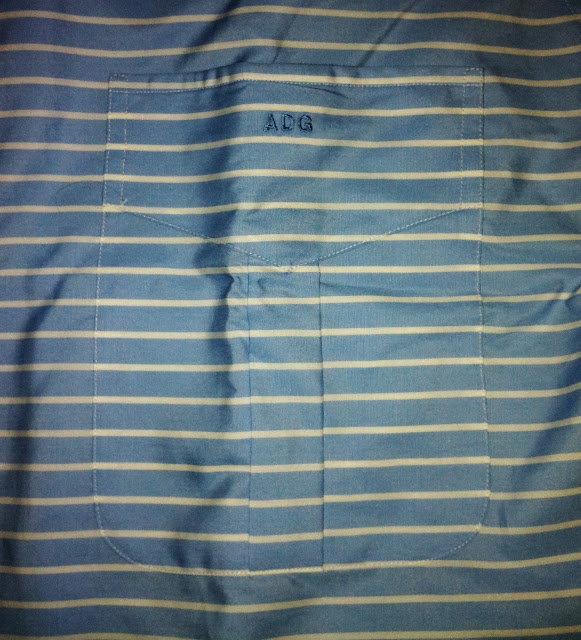 Guilty. Guilty as charged. My only regret is that Fluss et al wouldn’t vet my request that the ADG permanent name tag be commissioned in Times New Roman 32 font. They did though, as a consolation, allow a placketed pocket. I’ve requested a prototype shirt with bellows/poacher pockets for my next fuzzy foray. 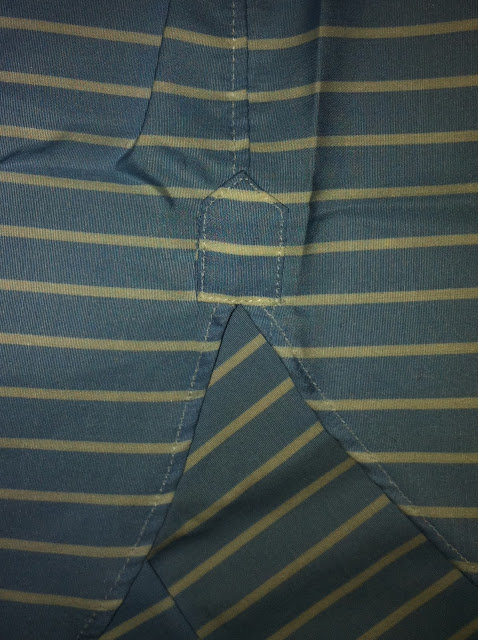 Another bespoken no-brainer chemise-wise includes these shirttail seam buttresses. Or is it buttressae? Unseen but crucial bolsterers of side-seam strength…Kevlar-esque insurance policies against which hopefully, you’ll never have to submit a claim. They remain irrelevant and without function until…until some Trixie, in a fit of passion, commences a manic-frantic blitz of ripping your damn clothes off. “Settle down baby! Let’s be a bit more methodical here. I’ve no problem availing my nicely tufted chest to you, but don’t rip my shirt.” 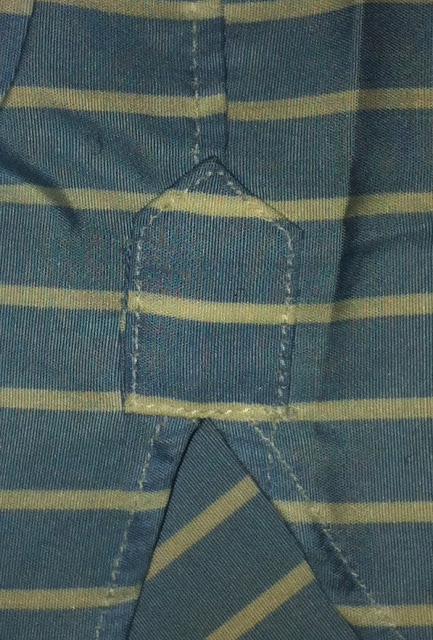 If such admonishments don’t settle Trixie down, the buttressae will help assure that the seams don’t, in a pique of resistance, resign themselves to rolling over and giving up. On the other hand, based on the caliber of Trixie involved, it may be worth sacrificing a shirt. Hell, I’ve been known to allow a Flusser suit to burn on the altar of whateverishness. 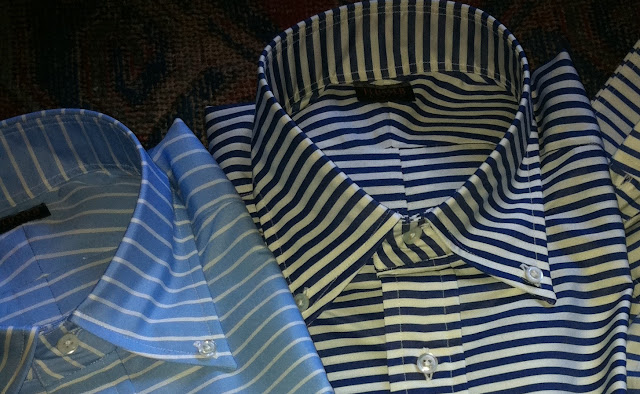 And finally…the collar. I rarely wear a tie with anything but a straight or maybe a modified spread collar shirt. Preferably straight so that I can anchor it with a pin. And you know how I feel about anything but a pin impaled collar versus that clip-on nonsense. But when I’m sans tie I’m avec collar buttons. It’s a holdover from my Tradfratty days. 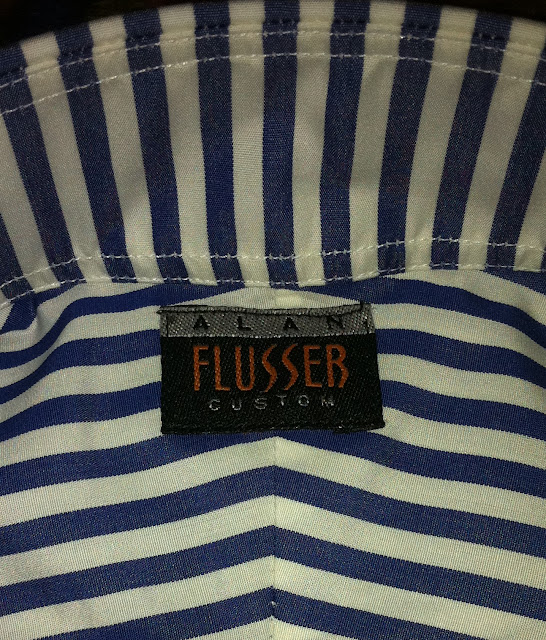 But these three Flussketeers sport a bit of collar unusualalia. Modified spread button down? You have to be kidding me right? I’m a lot of things...but not a collar kidder. Never…never do I kid about collars. Flusser collar variance just adds to the angularitaciousness of said ADG chemise hat-trick. 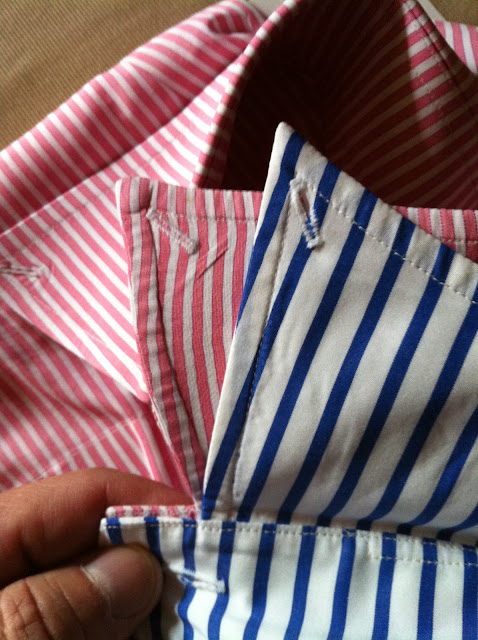 And the spread variance in these shirts versus my last round of absurdness is subtle. But not so that you wouldn’t look at the collar for a moment and go hhhhmmmm. Worry not—I’m used to it.
Onward. Horizontally buttressed.
ADG, II
Posted by ADG at 10:47 AM

Email ThisBlogThis!Share to TwitterShare to FacebookShare to Pinterest
Labels: Flusser

Beautiful shirts, I'm sure that the Duke of Windsor would covet them.

Wear them in good health.

Wow! How do you do it Sir? My eyes and head spins from all those fancy words. Have a great weekend enjoying those trixie-proofed butressessssss.

Nice threads. Those are interesting fabrics. Looks like a broadcloth button down humped a mercerized polo shirt.

It's always comforting to know I'm not alone in my collar lunacy. Most people just don't get it! Of course mine comes from being short with a short neck, often a shirt collar makes me look like I'm channeling The Count as they always seem to creep their way to standing at attention.

I'm sure if anyone can pull off horizontal stripes, it's you! Now let's see them on!

"Unusualalia." Good one. I'm gonna use it in classes tomorrow. AND, I just asked my wasband (here for Friday night martini/family time) the Baptist riddle. You've just taken care of two days' entertainment!
I kinda like the shirts, too.

You stole my signature word -unusualia - and threw in an extra "l" to improve it.
That black-white/white-black combo is s-c-a-r-y but I am wild about your new shirts. Enjoy.them!

LimeGreener...I steal everything. Nothing original here. Including these shirt designs.

YogaTeach...thx. How many martinis did the wasband drink? I remain in SC and it's been malt liquor for me.

Suburban...I hear you on the collar thang. I had to have the collars redone on an order of these several years ago. They were so wide-spread-long that when starched, they made me look like the love child of Elvis and Tom Jones.

Nolan...BRILLIANT characterization. Maybe not humped but perhaps an hour in the hot tub.

ScaleWormer...now that I don't write this drivel regularly, my head gets so full of wordplay and randomatrocious stuff that when I do purge, it's a lexiconical goat rodeo.

Herts...thanks. Been thinking about London quite a bit this morning.

LPC...Prunella...I can't help it. And it's too late to try and "fix me." BTW...what size Belgians did you order? Do you remember?

Of course, most of this is Greek to me - collar spreads and such - but the thing you do with language makes me giggle. Even standing up. Collar kidder indeed.

I just saw the "sobriety check point" striped outfit. Nothing says, "don't drink and dress" like that getup does.

Pimpriffic. When are you going to pull the trigger on some plaid (twisted 45 degrees) shirts? Maybe with snap buttons and Western yokes--and fuzzy button down collars, of course.

And why are the monograms so small?