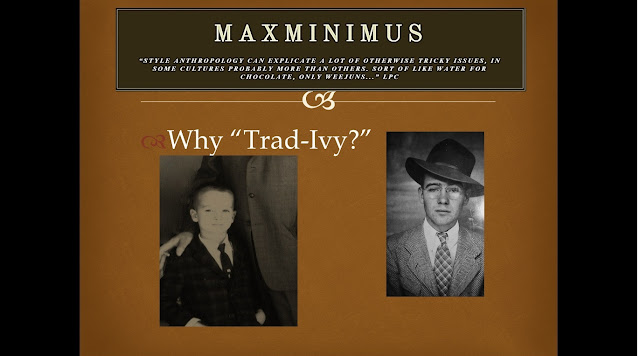 This will be a rather brief catch-up till I can catch my breath this coming weekend. I returned from Gotham Sunday night and left yesterday after LFG’s Parent-Teacher Conference for yet another full week on the road. But I’m eager to share my perspectives on the Ivy Style event when I get the time. But for now… 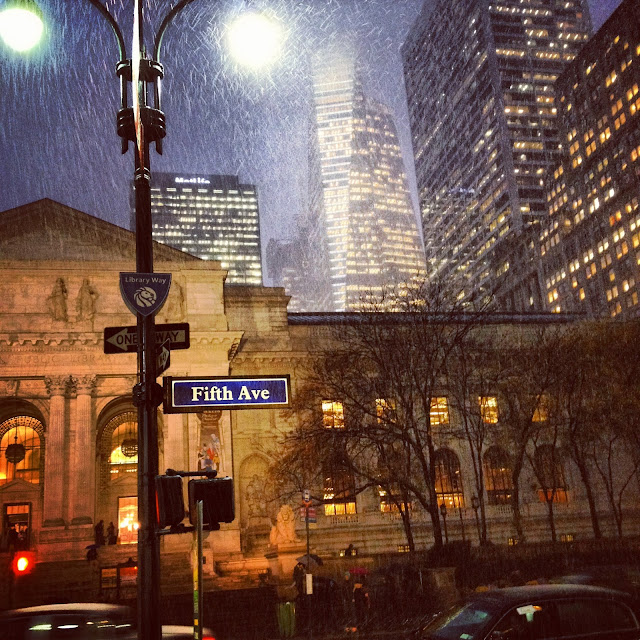 I rolled into Gotham on Wednesday afternoon and walked from Penn Station amidst the next round of Mother Damn Nature, to the Americano Hotel…accommodations courtesy of F.I.T. 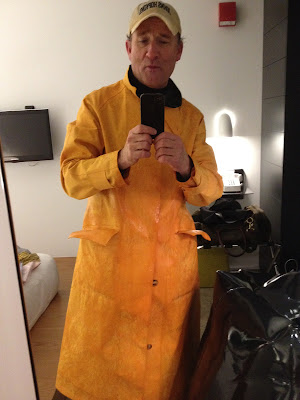 The walk over there was Nor’easterly bone chilling—it took me an hour to thaw out. My Flusser Mac was never put to better use. 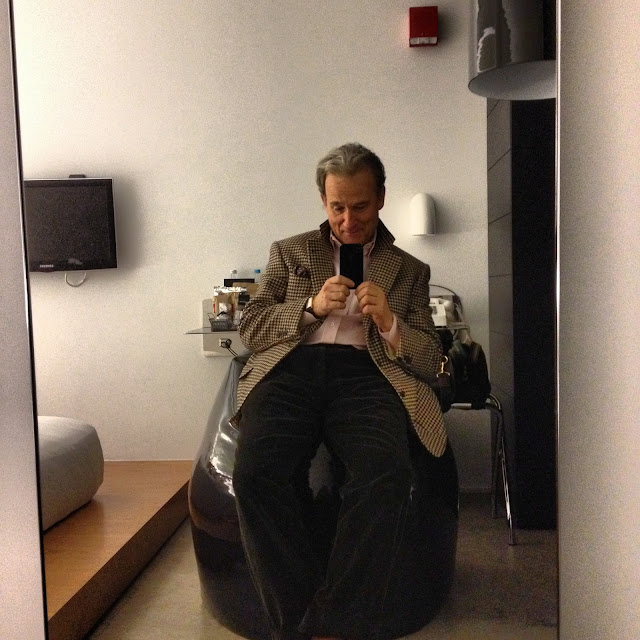 And the Americano? Fun…minimalist…Chelsea modern. With a confusing bean bag chair. 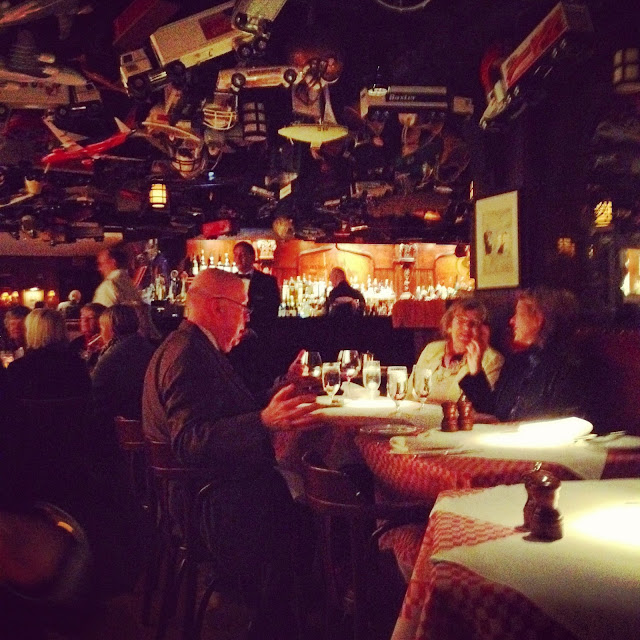 I’ll write voluminously about the various topics and speakers and how great it all was. But for now, just let me tell you that my friend Reggie Darling almost caused me to miss the entire freakin’ blogger segment of the symposium. I’m dutiful about such honors and had been in fellowship with Patricia Mears, Bruce Boyer and others about the Exhibition and symposium for almost a year. 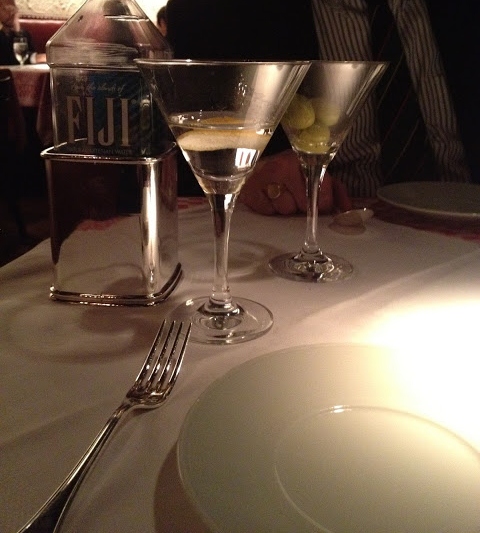 Eager to assist and honored to participate in the symposium, I was there on time…both days…actually early on Friday, but was whisked away to one of my favorite haunts for lunch on Friday…the proverbial 21. Reggie ridiculed me into martinis and I, stalwart in my resistance to such peer pressure and cognizant of my being on stage when we returned, gladly complied. We were late returning. The blogger segment had already begun. I, martini fueled...had to do the walk of shame and take my place on stage and apologize for being late. Imagine what an even greater hit I’d a been sans hooch. Hell, I probably did a better job with a little brine on board. Thanks Reggie!
I was able to escape and swing by the Flusser Atelier for a gander at a boondogglesque concoction consisting of the above shown parts. I’ll leave you hanging till later on its gestation. 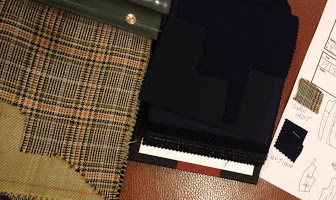 Then over at Paul Stuart, Puerto Rykken and his minion, Paolo, who by the way at twenty years old, is worthy of an exclusive blog post himself, ganged up on me, using the textile tazers that you see above. 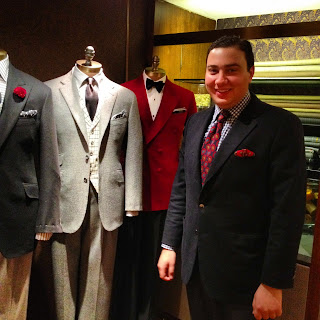 Stay tuned for Paolo…he’s the love child of Pablo Neruda and Jackie Gleason and he's not to be missed. Bam. 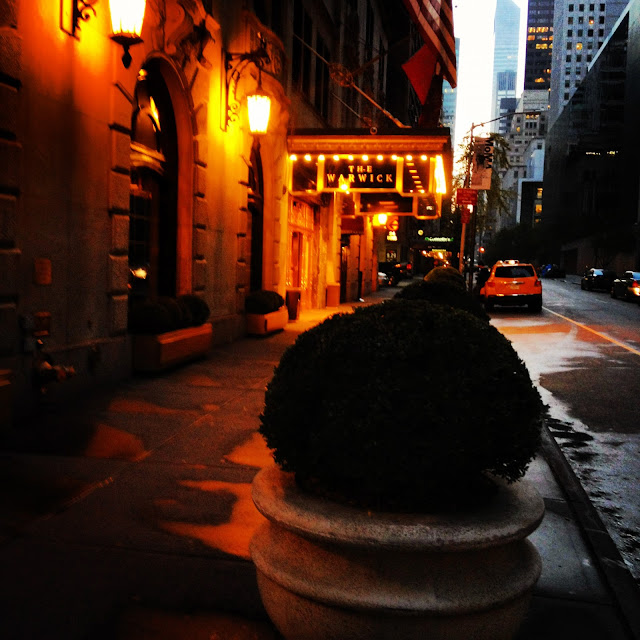 The balance of the weekend had me decamped to the Warwick where a good time was had by all. We scooted down to SoHo and dropped in on Jay Kos. I don’t get it. 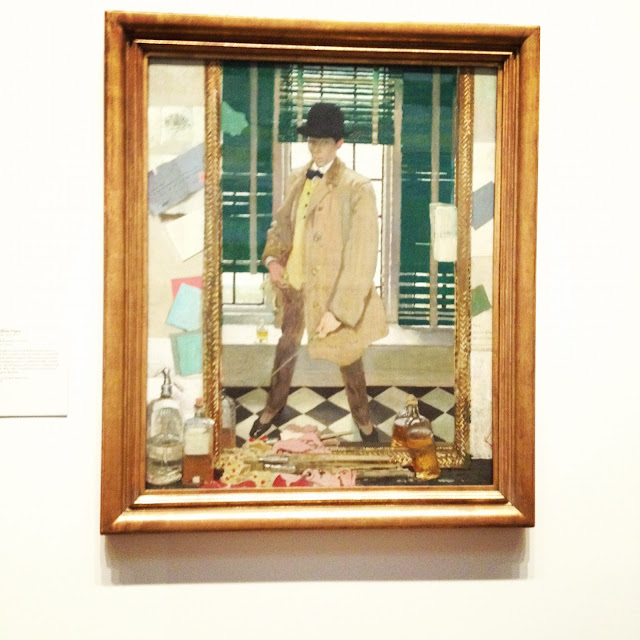 War Horse on Saturday night and the Met on Sunday. Saw some old friends including William Orpen.
Then back to reality and a delightful re-entry for sure. I’m away till Thursday night on my next to last sortie for the year. I have a Las Vegas show that I’m doing after Thanksgiving and then I’ll wrap another blessed year professionally. 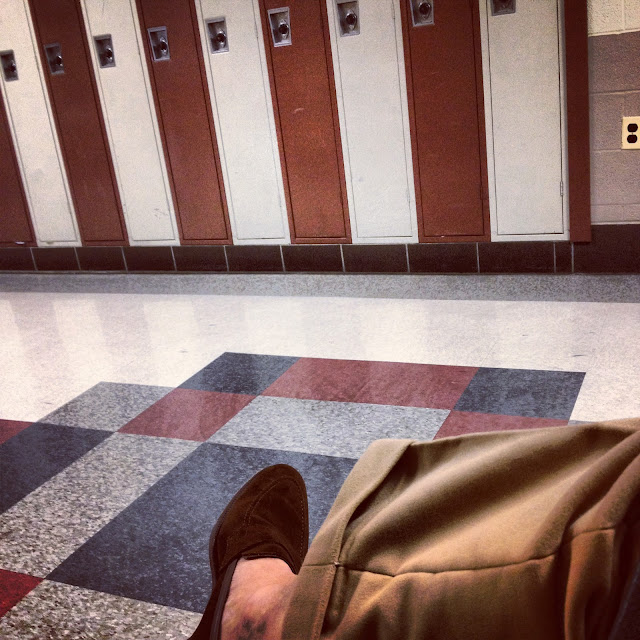 But the highlight of the post Gotham weekend was my meeting with LFG’s teachers yesterday. After a tough start so far…she was sick for five days in September and she lost her grandmother…my former mother-in-law…six weeks ago and missed almost another week of school…my baby is currently in all-A student in one of the most academically rigorous school districts in Montgomery County Maryland. 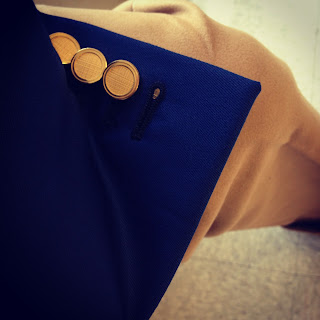 Onward. Blessed. Pinch me. Just steer clear of my G-Spot and my royal blue blazer.

I look forward to reading your thoughts on the symposium. I need a new summer blazer and love that shade of blue. Do you mind sharing the cloth?

And if the word reprobate didn't exist we'd have to make it for you. Symbolically, only, of course. Someone always has to arrive martinied to these things. Thanks for taking one for the team.

Gasp!!! Your drink is on the left side of your plate??!!!In what establishment are you dining that they didn't know this is wrong? In New York no less?? Oh, my. ;)

Great post, I will be in NYC soon for the pre-Christmas shopping fest. Glad to see my old haunts 21 and the Warwick are doing well. Did you have a chance to see Pat at Belgian shoes ? I can't wait to see what they're building for you in the secret lab at Flusser. Is there any video of the Ivy Style presentation or have you destroyed all evidence?

Max darlin, you were sinsayshunal!

What! No mention? Is it because I just drank rather indifferent wine?...

Is that the never ever as-far-as-I-know photographed Reginald Ambrose Darling? He has that killer dog at home you know, so if you've published these photos without his authorised release, you'd best make plans. Oh to have been an object on the tabletop that day.

ADG, you have redefined "fashionably late" as "sartoriorally late". Not that redefining anything is new to you.

I don't know or understand your alchemy, I deal mainly in attire stained with animal....... actually, lets not go there. But your writing is lush. It's like learning French again, strange words, sighs and innuendo... I'll be back..

I think your "boondogglesque concoction" is an opera cape. With sleeves. And a six-inch-high collar.

It is, of course, reversible (the body will be made out of the orange/plaid material on the right). It will come with a matching codpiece.

Dearest Maxie,
It was a delight, indeed, to spend an amusing and jabber-filled hour or so in your delightful company, along with TW, in the womb-like deliciousness of '21. Now, as to those 'tinis -- I distinctly recall that I was the one who level-headedly squashed your insistent campaign for a second one! I blame your tardiness on those in charge of the symposium for making an unexpected last minute change to the schedule of the afternoon's presenters, in which they moved up your bloggers session to immediately after lunch instead of keeping it at the end of the day where it was, to the best of my knowledge, scheduled. I must add, though, that -- despite lubrication of said Stoli, up, very dry with a twist (along with a plate of '21's scrumptious chicken hash) -- that you charmed the Ivy audience upon your return, were highly entertaining, and had the audience in stitches throughout your very well-illustrated and thought-provoking presentation. You are, in a word (and on MANY levels), a pro, Sir! -- your admiring friend who counts himself fortunate to be able to call himself that, Reggie

Let me get this straight. You treat yourself to bespoke everything but send your only child to a public school?

"textile tazers"! Ha, ha, love it - you certainly have a way with words.

Natural Shoulder Mon…thanks. For the life of me I can’t recall the name/number of the medium blue cloth. Here’s what I’d suggest you do. Go to your tailor and ask to see the lightweight blazer cloth book. But also ask to see lightweight blue suitings. Pick something that’s one or two swatches “back” from the typical navy swatch and bam!

LPC...Thanks, as always, for the LFG affirmation. I believe you and I have discussed this before—I believe that LFG’s study habits and general desire for learning are now…perhaps not self—fuelling/motivating—but so well established that her trajectory is a bit easier to maintain. But what is equally important and impressive to me is that she’s not some neurotic-obsessed child who’s one dimensional re academics. She’s empathetic and silly and fun and…I love her more than anything in the world. Martinis be a close 2nd. I was glad to take a pop for the collective “team” of other bon vivantalated reprobation-esque imbibers.

Leopardini…A gal friend joined me for the weekend in Gotham. I had to drop off a pair of Belgians on Saturday for rubber soles. Pat was not in the store but, I think the younger guy’s name is Robert. He was busy helping a customer but stopped and looked up at me and said… “Are we shipping ‘em or are you coming back for ‘em?” I said “ship em” and he said “leave ‘em on the chair” and “good to see you.” We left. My gal said… “You didn’t give them your name or an address of a credit card or anything.” I said… “They kinda know me.” She then pondered the Belgian genre—oeuvre thang and declared them to be “Elf shoes.” I think she might end up being transitional.

Flomation….I’d a been more synsational had they given me a half-hour solo and the latitude to stand up and speak to the crowd untethered to a white cloth-ed card table. I woulda still had my boy Tintin advancing my slides for me.

Sartre...I wrote that ditty on the fly and will, when I write again, effusively gush about you and your Junior Varsity drinking habits. Bam. With respect and gratitude for you being there.

OliveReggieMug…thanks for the comment. I scooted back over and cropped a bit more of the picture of Reginald Ambrose Makes-Me-Drink Darling.

LimeGreener...I HONESTLY didn’t mean to be late and I’m now in rehab.

Loulouloulou...animal stained attire…automobiles with half eaten hot dogs sequestered in the toddler seat…cat hair…all such things are talisman of living authentically. I slip in an out of those realms as well.

FogeyoftheYoungestMonMon…WRONG. The opera cape is sleeveless and the collar is eight and a half inches, which is a rather symbolic length for me. It is reversible and yes…that part you got right…you know me. The plaid side will be what I most often wear showing. As for the codpiece, they haven’t refused to make it but there’s gonna be a delay. The little old Italian lady who for years, was THE codpiece maker (Of course it’s all hand stitched. Machine made codpieces lack the “floating-give” that is SO desirable) was recently lured away by a local Hacky Sack atelier. Seems that her codpiece handwork is exactly what they were looking for to actualize their bespoke-artisanal-heritage line of eleven-hundred dollar sacks. All I could say upon hearing the news was that mine was worth at least double that.


ReggieDarlingPal…Thanks for 21! All’s well that ends well and I kinda liked doing the talk awash in 21-ness…chicken hash and jet fuel. I’m looking forward to many more years of friendship and hash and hooch and laughs and you and Boy paying for LFG’s Yale tuition. Or Vassar. Or, if we must… Princeton.

AnonymousStraightGetting...Yes. We send our only child to public school. How the hell do you think I get the dosh to bespeak everything? We were perilously close to sending our little gal to one of the posh private joints in D.C. Our reasons for not doing so are manifold and aren’t germane to debate/dialogue/input/reaction/sharing here on my blog. Rest assured, she’s getting, courtesy of Montgomery County Maryland, all the rigor she needs.

Maventazer...That’s EXACTLY what they are. They gang up on you and fire from various heights and angles and before you know it, the darts are head to toe and compliance is one’s only subsequent option.

Anonymous21—BlueManGroup…No. We went to Scores.

"WRONG. The opera cape is sleeveless and the collar is eight and a half inches...As for the codpiece, there's gonna be a delay.."

Good, you'll want to have that run up from some of your kilim remnants, and your fringed epaulettes also in kilim.

I know what you mean about codpieces: even the Black Label ones don't have the je ne se quois of the hand stitched ones (and frankly, Black Label rides a little high).

I've already placed my order for an elephant hide hacky sack from said atelier, but I haven't decided on the filling. Should I go with organic free trade quinoa, kopi luwak beans, or freshwater pearls?