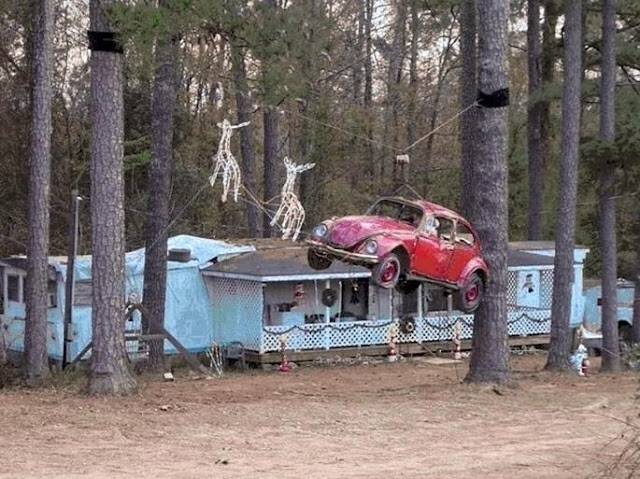 And miscellany this shall be. Shut up. 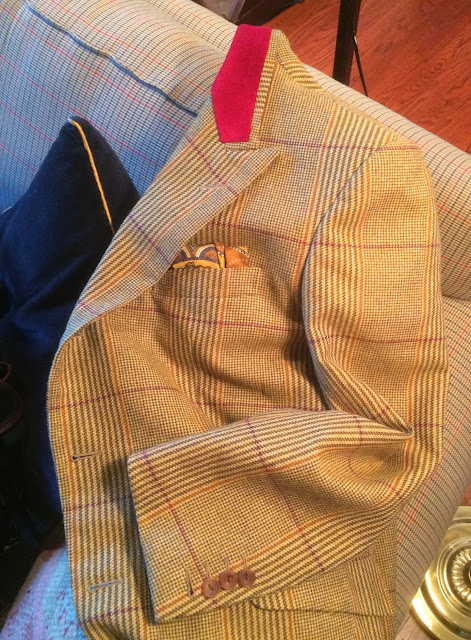 Oh…but before you shut up and I take over; let me pop this story with something sartorial. Because it seems like that’s what this venue used to focus on. I need to confess my guilt…about over-fuzzying this jacket. I’ve taken a perfectly sublime, ain’t gonna see ones-damn-self walking down the street in the same Russell Plaid jacket, ADG tasty contrivance…and tarted it up so over-the-damn-top-ly that even I, the Potentate of P-tang, can’t wear it out of the damn house. 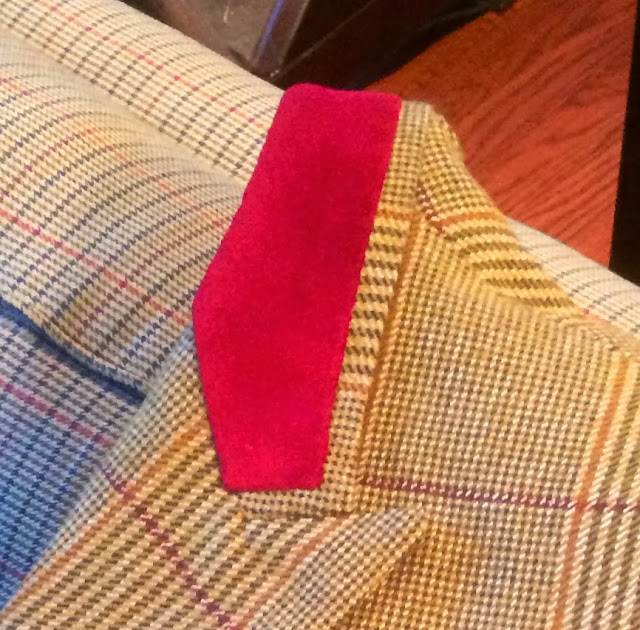 So I’ll have that Velveteen Rabbit meets a Vegas hotel suite sofa cushion collar…removed. And then I’ll write a proper story about how this jacket came to be. Shut…I’m serious. I don’t want to hear it.

I’ve said it to scores of people…While my blessings absurdly outweigh my challenges, I’ll be giddy when 2013 is over. It’s been a rich year, life-learning wise and my lessons learned-humility account is filled to the damn brim. My pugnacious declarations regarding my desire for 2013 to pass are  balanced with the knowing that if I crow too much about ’13 being behind us, the karma coordinators may show me a 2014 that makes this one look like a stroll through Burlington Arcade. It’s all about balance. Or something.

And one of the most amazing blessings this year has been my mother’s decision to not yet leave us. I believe, deep, deep, down in my being, that if we; amidst chronic disease or the end of our life journey, have some unfinished something that we've yet to reconcile or say or do or experience, we won’t let go. I’m not sure why my mom didn’t die in March. All I know is that the doctors remain pretty much speechless and when science and data driven clinicians use twee-ass words like miracle, I take notice. So amidst the humbling—for her and us—duties involved with helping my mom, we are all aware that every day she remains with us is indeed a blessing. 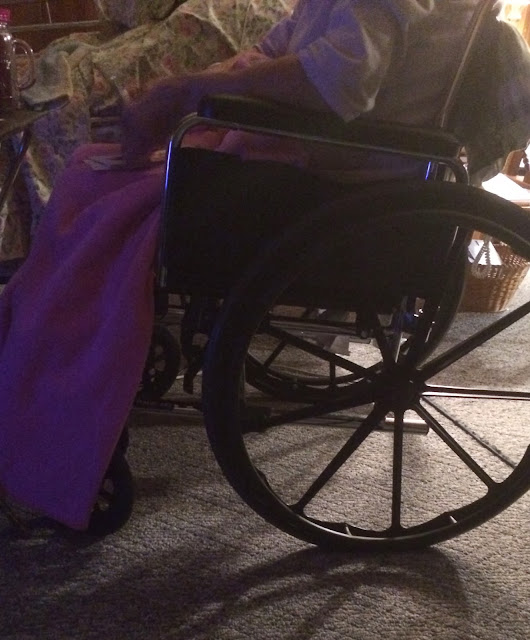 I drove over to spend one evening with her after my uncle’s funeral the other day and she was to say the least, on her game! Sharp as a damn tack and in my grill about how I was arranging her leg pillows and her three blankets that have to be just damn right and her little footies that I put on her feet inside-out and you’d a thought that I’d chopped her feet off. And then we laughed after I finally, barely, got things arranged to suit her. 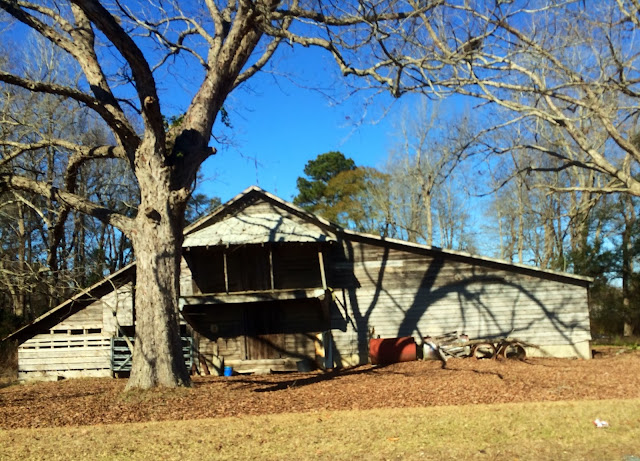 I hadn't been to the family farm in years so my trip down was filled with all sorts of memories and speculations about how I’d feel when I got there. While it’s sad to see the once bustling tobacco farms essentially idle—mainly because it’s winter—we rent the land to other sower-reapers so during the seasons, there is life and activity and the fallow fields are planted and life emanates. But I loved being there and my uncle’s funeral was sweet. More later on the farm because there’s fodder for at least one story. 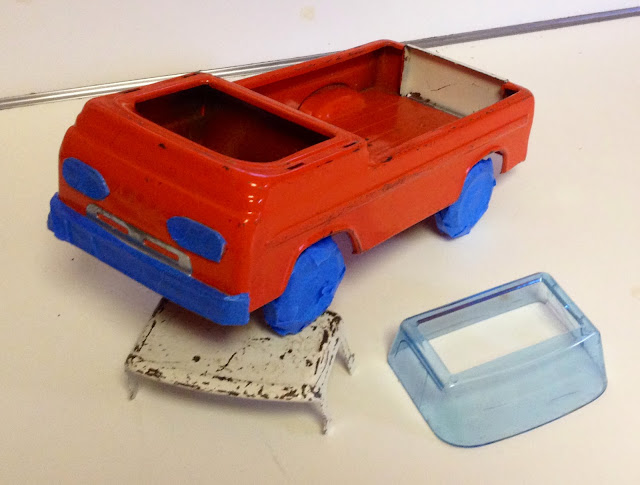 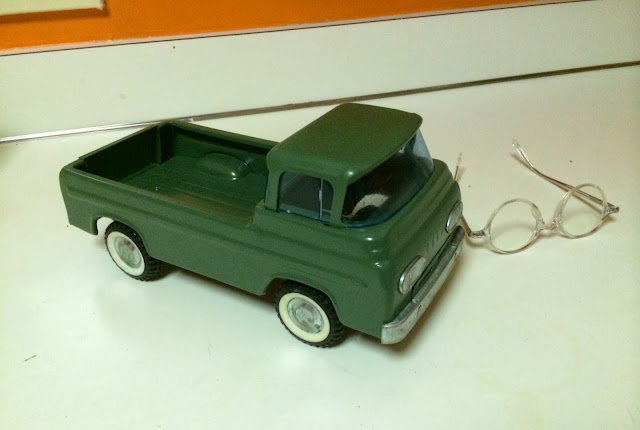 After…And yes, I realize that you're doing the “what the flip is this project ‘cause I know that LFG ain’t a part of it” head scratch right now. Well just wait till I write the story. 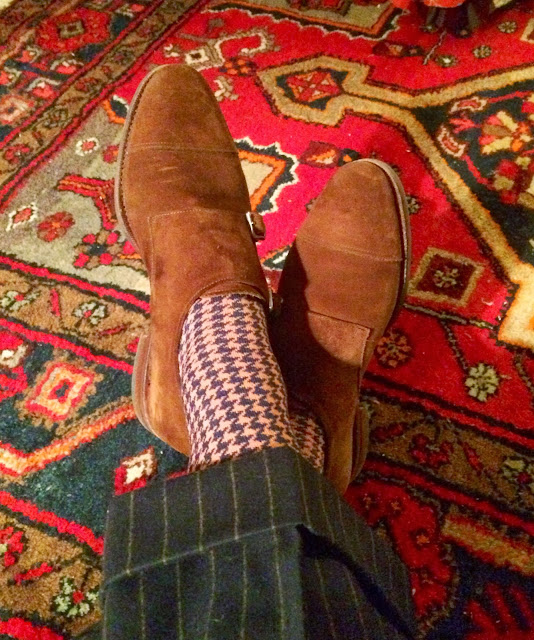 Socks…I told you this was gonna be a disjointed pile of irreleventia and collateralia. My latest obsession is with these oversized houndstooth thangs that F. Todd HogFarmer Howell of Coffman’s Menswear has been sending me…NOT for free. I pay the freight because my man FTH has a lovely little gal to spoil and I know what kinda dough that requires. So when I find something I like, I get duplicates and I’ve had FTHogg, the most mismatched swathier alive, supply me some spares of these babies. 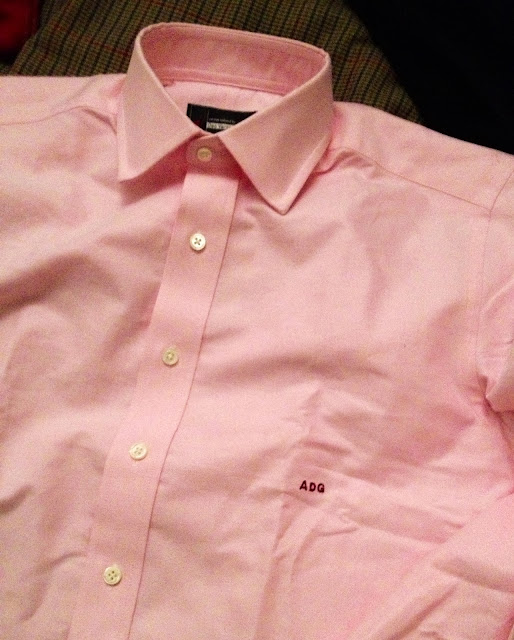 And I owe my man Vinnie of DeoVeritas shirts a story and review of this bulletproof pink oxford cloth shirt that I commissioned over at his site. So until I do so, please go over to his fully automated, order with ease website and make yourself one. Please. 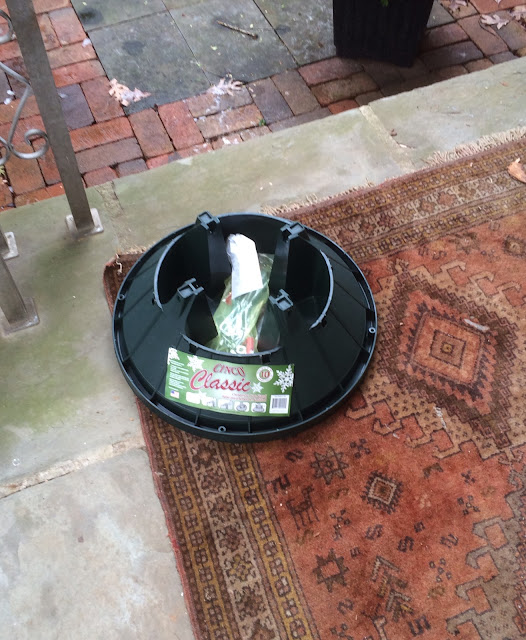 LFG was supposed to be over here at my Bethesda digs like every other day after I moved within five minutes of her, right? I mean...wasn’t that the strategy for moving here? Well so far it ain’t happenin’. What was I thinking? That her blessed and over-scheduled life would suddenly be less so? Christmas is in six days and we still ain’t got no tree. I’m gonna go and buy an inflatable one today. 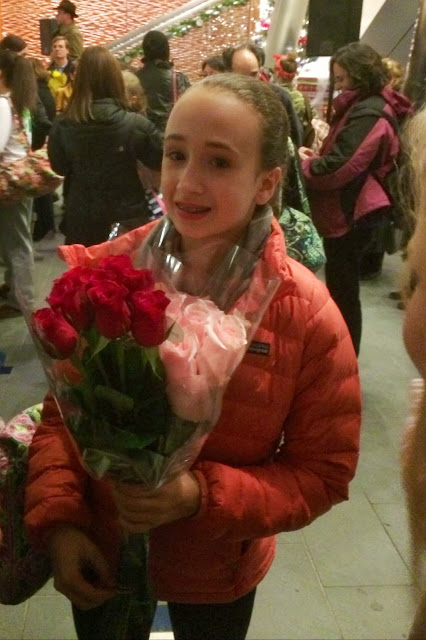 But her holiday dance recital last weekend was just great. Surprise I know, but I’m as proud a parent when in the audience as anyone could be…regardless of how the performances go.

This year was different though. I can see real talent and I can see an incrementally more skilled and accomplished dancer in my not so little LFG. Her mother and I both marvelled at how this year’s recital showed us a daughter who’s a really talented performer. And then I went home. Alone. 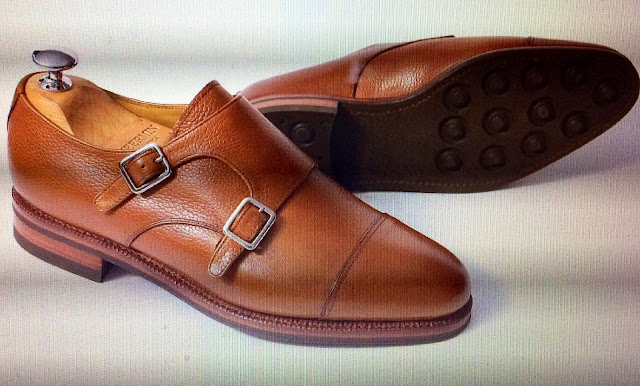 Meermin…If anyone should pay me for shilling…which to-date nobody has, it should be Meermin. At $240.00 a throw, I’m awaiting pair number two. Merry Christmas. To. Me.

Let me close this one out with my mom’s next door neighbor, Harry. I shared photos of Harry and my mom when we finally got her out of the house and Harry bounded over to love up on her. I posted this on my tumblr but it’s sublime enough to share again. The best by far, Christmas card of 2013. 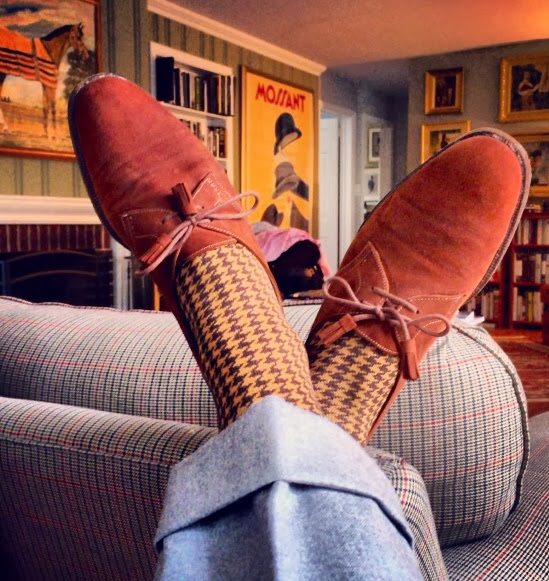 Eighty-Gee. Bofe
Oh! And one more thing. My all-time favorite Christmas song is Boogie Woogie Santa Claus sung by Mabel Scott. But her admonition for Santa to ... "run, run, run Mister Santa--jump, jump, jump Mister Santa" disturbs me. He's overweight and probably a type-2 diabetic with mild congestive heart failure. And we don't need his jolly ass on Worker's Comp. bam.
Posted by ADG at 8:19 AM

Merry Christmas. What would the Internet be without you? A sorry damn place, that's what. I wish you and LFG, all the best for 2014. I know how it feels to be the optional household and it's horrid. This too shall pass. Buy her a car as soon as she's legal. xoxoxoxox.

My preciousness, go get that tree. Yes you. Get it in the stand, get the lights up, get the piece of fishin line looped thew the trunk tied to the tiny nail you done drove into the bookcase. Trust me, she'll love being released from that particular tradition this time around. Next. Which of the oxfords at Deo is the "bulletproof" one. I narrowed to "meadium-heavy" weight, then was presented with a choice of French Oxford or Royal Oxford. Which did you select? Next. I've already hugged Harry, but now I want to hug the individual who stands behind Harry, I presume he was Harry's engine, I just love him whether he's wearin turkwa or not. Next. Did you ever get a renter at your Old Town flat? I hope so. Next. The velvet has to go, really? Was it that tumblr commenter who said "it ain't right, it ain't even wrong"? Take care Max, Merry Christmas, sweetie.

LPC...and Merry Christmas to you, too, Prunella.

2. Harry's engine is his brother-in-law.

3. And yes, I'm a gonna get the damn tree today...in prep for the five minutes that she'll be over here to fetch her loot before leaving me next Tuesday morning.

4. I do have a renter. A nice person that Kathie Truitt...of Hillbilly Debutante blogger and book fame rented it to. Kathie is a real estate agent in Old Town.

5. And finally, I decided that the velvet had to go as soon as I saw it.

Welcome back to sartorial superfluousness!

LFG makes me think of a line from Sunrise, Sunset: "when did she get to be a beauty?" Your little girl isn't a little girl anymore.

Thanks for sharing the song!

Runneth over indeed dust bunny. Time will pass and like 2013; 2014 will bring more to smile about.

1. I dislike the red collar as well
2. Cool sofa!
3. That redneck Christmas display looks like the digs adjacent to the train station outside Charleston
4. I second your thoughts about 2013/fears about gloating for me as well as you but hope I do go for a stroll through Burlington Arcade in 2014.

Merry Christmas, Bubba and young Bubbette, from lovely Charlotte NC (Our motto: "I was with THE BANK, but now I'm a Life Coach.")

NCJackie...I laughed out loud when I read the motto. Classic. I've got to get there and go to the NASCAR thang downtown.

Reggie...I'm not yet finished with the truck. There's a great story to accompany it.

I agree with Flo. Go get that tree NOW if you don't already have it. Then make it the best looking tree in Maryland. . I wish you could decorate it in bowties. A preppy tree would suit your personality or at least your yen for haberdashery. Howev you decorate it, we want proof positive that you got the tree so take plenty of photos. Yes, your readers are relentless that way.

Love the way your place is looking. Very handsome just like its owner. Now, go out and rock that tree. You've got a teenagers on your hands, and they want to sit on their behinds and text. I know, we have one around these parts. Just remember that on Christmas, everyone reverts to childhood.

Damn were you in Arkansas? Nice pebble grains.