Saturday: We are still in the midst of a blizzard. I've got tons of comfort food and Patagonia-Capeline long underwear so I'll be fine. Snow without LFG is a drag to say the least. You know it's bad when the local honky tonks in Old Town are closed. I might have to resort to drinking alone. I've got plenty of time to write-maybe I'll actually contrive an original post.
Interesting to read this one again-I never had the shirts made-mid June 2009 saw me in the midst of a cash crunch so I put the order on hold. Y'all get up off of some of that old moldy ass money you've been secreting and buy them for me!
Sofa-ward....ADG sans LFG
I remember when Flusser’s Clothes and the Man was Published in 1985. I was already a fan, having read his first book, a modest paperback titled Making the Man-published in 1981. Clothes and the Man really hooked me. I’d spent some summers and holidays working in a haberdashery that first opened in 1927 so I was primed for the next level of sartorial erudition.This of course was pre-internet and pre-almost anything else regarding sartorial history, rules and decorum. Men were taught the rules of dress from their fathers and other men. If you were fortunate enough to have a father who dressed for business or who had a military background, chances are you got a better lesson in grooming, deportment and dress than others. Flusser’s books were key for me even though I’d never known of him or bought any of his ready to wear line. He was in Gotham and this modest consumer was in South Carolina.I then made my way to Washington D.C. during college and bought a couple of Flusser’s dress shirts from Britches back when Britches of Georgetown was a meaningful interpreter of men’s style. I also bought my first gut-end Thurston braces there. Polo was still a major influence but Alan brought another level of refinement and elegance to the mélange.Fast forward a few more years and I through happenstance and serendipity, find myself working for a Swiss pharma and chemical conglomerate. Serendipity that would set the course for the rest of my life. The company provided me structure and discipline that in retrospect, was good for a kid right out of college. The corporate dress code was something that I long to see again. Suits only. NO sportcoats. I miss the precision of intent and demeanor that dressing for work cultivated. 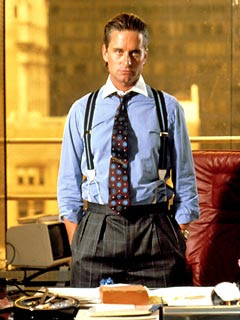 The Swiss corporate environment was the perfect place to spawn the 1980’s double breasted-in your face-contrasting collar-Gordon Gecko look. And you can bet that I was right in the sweet spot of that trend.So, you are thinking “What the hell does this have to do with stripes?” Be patient, I’m getting there-my Adderall hasn’t kicked in yet and I’ve only had one cup of coffee. So then this move Wall Street starring Michael Douglas debuts in 1987. I’m now five miles from the Lincoln Tunnel-living a riveting existence in the corporate boiler room of said Swiss company and loving every minute of it. Paying the dues to climb the ladder right? Cost of living off the chart but I’m in Gotham every weekend-courtesy of my 1985 Jetta-no company car with this assignment-those perks come later. 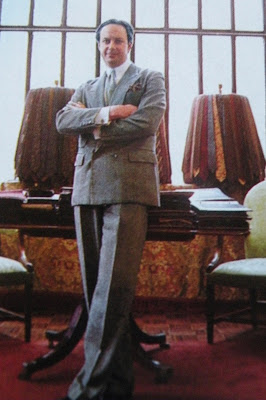 Flusser does the clothes for the movie and I see this horizontal striped shirt that Michael Douglas is wearing and it unsettles me. The stripes are going the wrong way. I gotta have one. I have no money but I’ll find enough to get one of these shirts. Flusser had a shop in 1988 on 52nd Street in Gotham. This shirt wasn’t to be found at Macy’s or Lord and Taylor. I’d already exhausted those options on the Jersey side of the river.
So I find the address of Flusser’s shop and during lunch one day, I climb into the Jetta and drive through the tunnel in search of the horizontal striped shirt. I find the shop and am riveted with excitement. I’ve had seven years worth of Flusser tutelage brewing and maybe, just maybe I would meet him in person. No such luck-this was when Alan was heavily involved in his ready to wear line and probably seldom spent time in the custom shop. Alan’s cognoscenti were in full force and they gladly sorted me out with the horizontal shirt. The above photo of Alan is circa the mid '80's-in his Gotham shop. 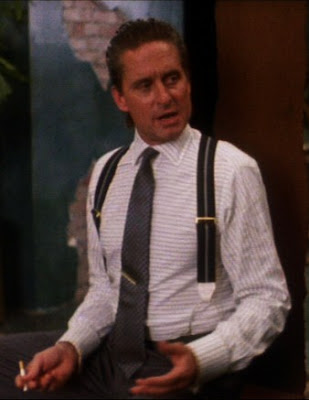 Only one in my size so the choice was easy. Coincidentally, it was the same one Douglas wore in the movie and a color combination that could not have been less flattering to my complexion. It cost as much as my Jetta was worth. I pointed said Jetta back through the tunnel feeling kinda like you do after Bikram. A nice refractory flush of endorphins which made it easy to contrive an answer regarding why my lunch break took two and a half hours. Dental appointment. Not entirely untrue since I had to knock one of the gold caps off my front teefus to pay for the damn shirt. 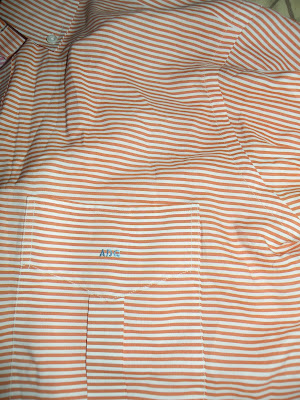 That shirt is long gone and so is the in your face sartorial decade of the 80’s. Horizontality hasn’t left me though. I learned how to contrive a less dramatic hybrid of the wide striped-spread collar horizontal rig and now wear a button down version courtesy of Flusser. 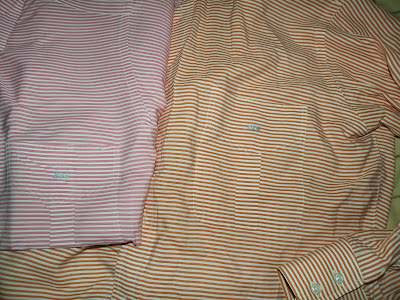 You probably have things in your closet that you "wear the hell out of"-these two horizontals would belong in that category for me. 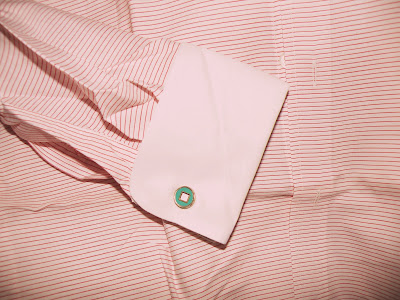 I do hold onto one remnant of the 1980’s. An Ike Behar horizontal striped dress shirt. Very formal looking and still appropriate for evening events and weddings. I’d never wear it to a client meeting. 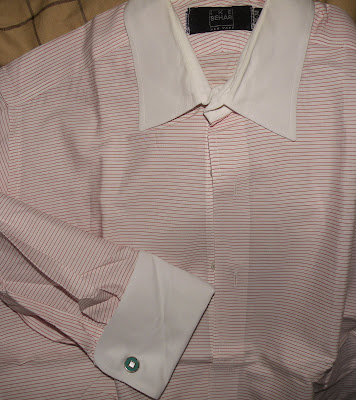 This shirt sees the street about twice a year I'd say. 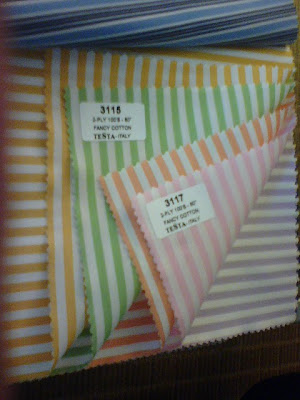 So, the Flusser posse, sans Alan rolled into town this week to deliver clothes. No formal trunk show with all the props-just a delivery and fitting visit. I go over to the Sofitel in DC to meet up with the guys for dinner and start looking through the shirt swatches. It’s time for another horizontal chemise but I have no money. The good news is that I have six weeks to figure out how to pay for the minimum order of three shirts. Only one will be horizontal. 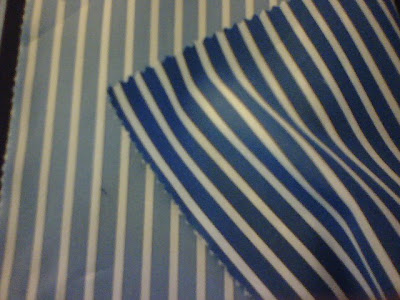 The powder blue swatch represents the horizontal contrivance in the works. I know-you are thinking that it won't work, that it'll be too dramatic and downright gaudy. Stay tuned for the finished product. You're gonna like it. Horizontal is good. 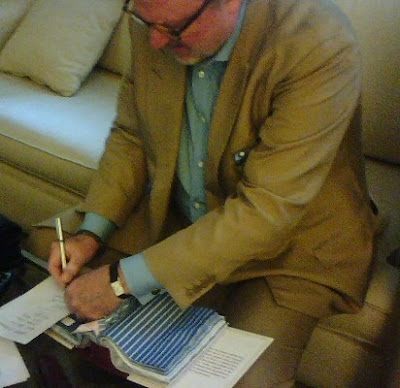 Here's my man Mark "Puerto" Rykken (new nickname courtesy of Tintin) writing me up.
Ok, it’s sunny here today. I’m off to the pool for a little horizontality and sun damage.
Posted by ADG at 1:20 PM

I'm all for the revival of the horizontal stripe! It's like sideways seersucker.

I'm hunkered down in this epic blizzard, too - but the bars on my street are open! I think the DC-dwellers like to pretend they are a hardier bunch.

Sideways seersucker...great! And there is a pair of horizontal corduroys at J.Mc. in Georgetown with my name on 'em. Y'all aren't any hardier over there. Have fun.

I was working in Philadelphia in 1989 and despite having great stores in town like Boyds and Dimensions, I had to order my horizontal striped shirt from Britches of Georgetown because none could be found locally. I had a lovely Countess Mara tie for that shirt. This brings back great memories of the 80s; I think I'll go revisit my old issues of M Magazine with a snifter of Grand Mariner.