I accumulate from time to time a cache of pictures that really don’t tell a story per se…well now that I think about it…same can be said for a lot of what I assemble here. But as usual I digress. I had a smidge of LFG Spring Break visual remnants left and decided as opposed to a well thought out story; I’d just dump the menagerie here and now. 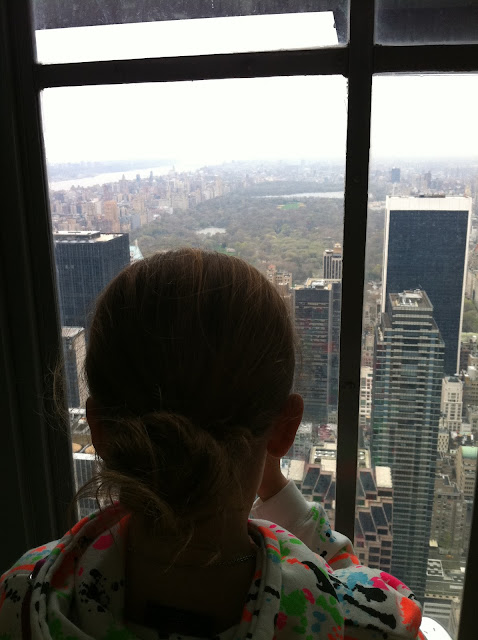 Gotham and the Waldorf…sans their bedbugs from a few years ago, was great fun. And when we returned home to Alexandria, we decided to finish out the week stay-cation style. You know, just hang around campus instead of another travel sortie. We have one week in each forthcoming June, July and August for additional travel frolic. 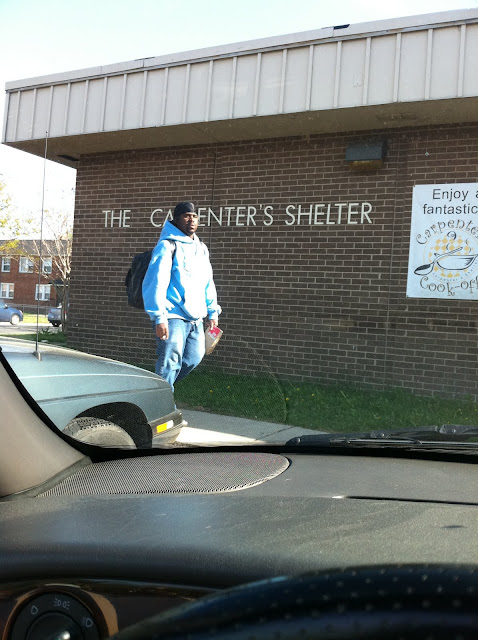 So we did fun local things including donating a ton of stuff to Goodwill as well as spending some time over at the Carpenters Shelter, a local homeless shelter that houses individuals and families.  Synthesizing the dichotomy between the Waldorf and the Carpenters Shelter was a good thing for me and LFG. It’s all about balance. 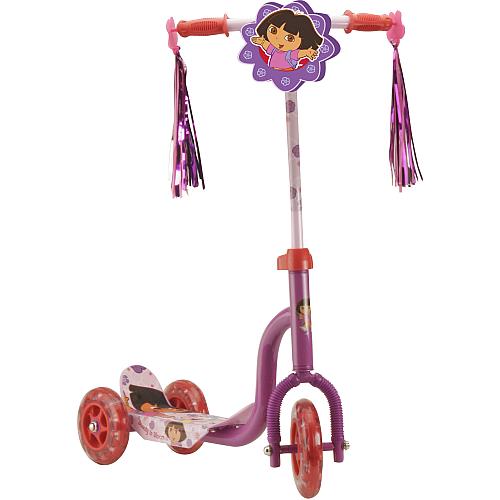 I remember one time when LFG was about three years old; we did what I call a Goodwill purge. We talked about the things that we didn’t need any more and how they’d be of value to those who have less. But we discussed it in “three year old” style/parlance. I’m an imperfect parent but one thing I try not to do is slather on the guilt that was part of my upbringing. (Jews and Catholics don’t have the market cornered on the guilt/suffering thang) Three year old LFG and I loaded up the car with a plethora of things, including her Dora the Explorer scooter that she never used. Never did actually—it was pristine. I told her how some other little girl would be overjoyed to have it and LFG agreed to donate it.
But by the time we arrived at the Goodwill shop, my little gal was pouting to beat the band. We need to help our children learn to be kind, less selfish and more truthful. We don’t need to teach them the opposites…those come standard…built-in…from the factory. I knew what it was. LFG didn’t want to give up the Dora Scooter. My first inclination was to give her the proverbial “big talking-to” about how blessed she was with material things and how selfish and uncaring she was being. But God’s hand was on my shoulder and his other one just slapped me upside the head. I told her that it was ok and that she could surely keep it. We offloaded the balance of the loot and the three of us…LFG, the Dora Scooter and I, headed home—home being a half-mile away. Just as we arrived, LFG said “Dad, can we take the scooter back to Goodwill now?” And we did…and I spent the next forever telling her how proud I was of her and how some little girl, just like her, was gonna love the scooter. 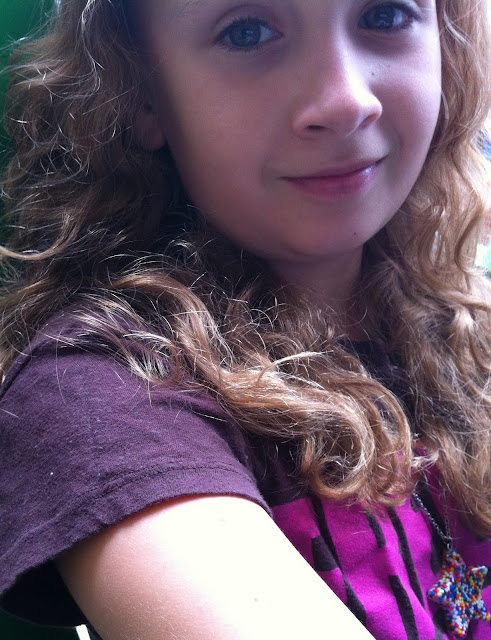 It’s easy being a good co-parent when the raw material for success is so rich and when LFG’s mother is such a good one. LFG is a really decent kid. Some say that having special needs kids is God’s way of teaching us how to REALLY love. My best buddy has a Downs Syndrome little girl and she’s such a sweet thing, though fraught with all the collateral issues that accompany Downs. And her daddy, my alpha, Ducks Unlimited, gruff, outdoorsman buddy is the most informed, focused and involved parent that any child and especially a special needs child, could ever hope for. I deal, so far, with nothing of that magnitude. 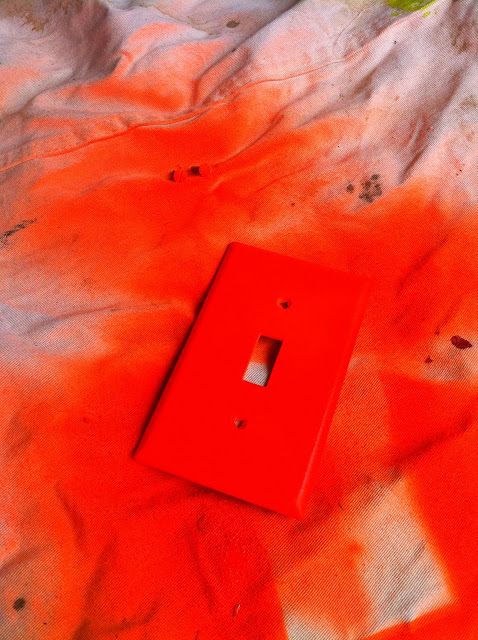 So LFG has made one “B” on her report cards this year. Based on who she is and how she’s doing in all things ten-year-old life journey-wise, when she wants a Day-Glo orange switch plate to accompany her lime green ones, I comply. 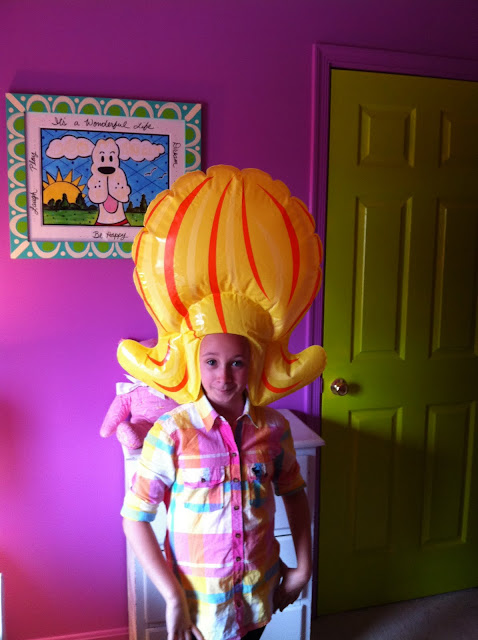 LFG’s room has been a work in progress and the progression took on a rather Seussian theme from the get go. After finding last summer’s inflatable hair, LFG concluded that there probably wasn't a better way to shield her golden curly locks from paint splatter than the B52 singers flip hair helmet. 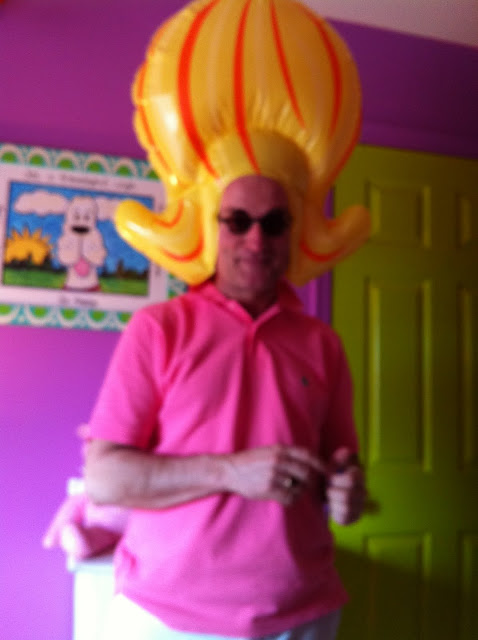 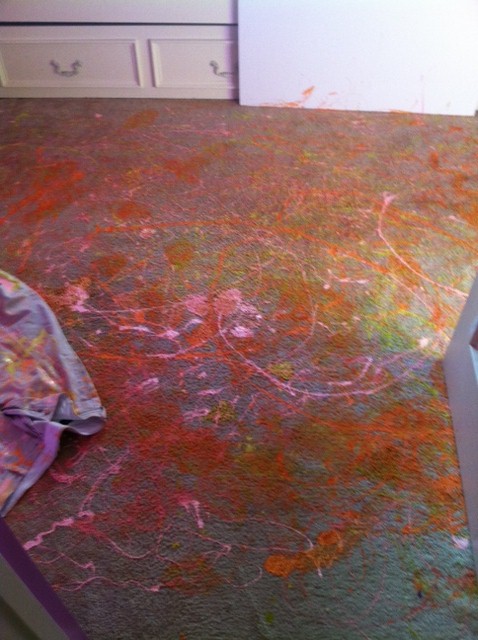 “Oh no daddy, we’ve got paint on the carpet.” (The carpet was put down in 1989 and has been host to several tenants during the years that is was my investment/rental property. It’s time for new carpet in LFG’s room) “Ok, so we did LFG. Let’s now make the best of it” 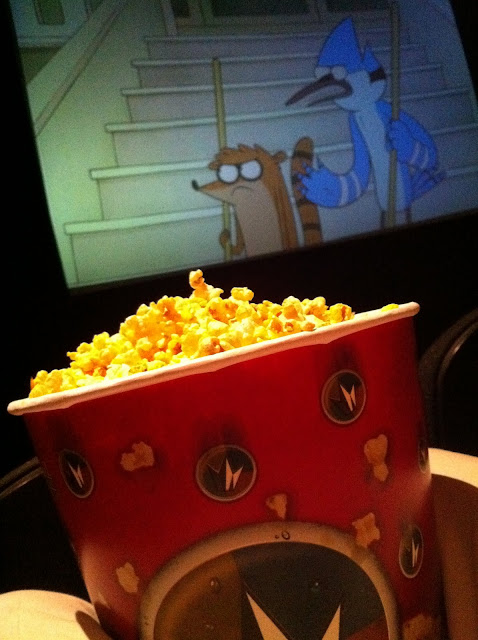 Then Saturday afternoon saw us attending an independent film. 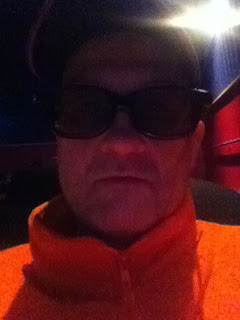 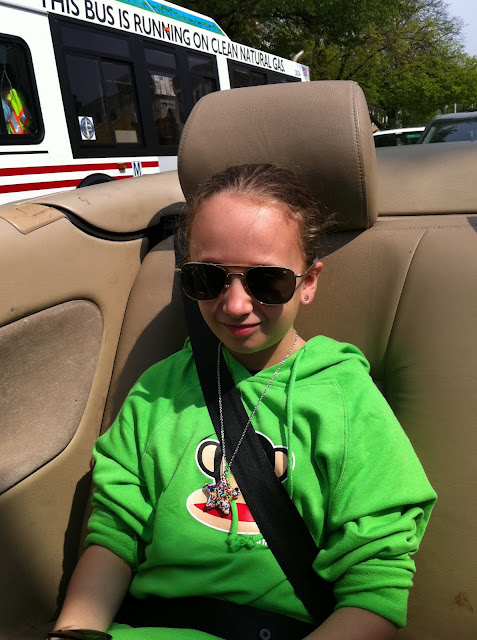 And then the weather turned top-down-esque. So much so that LFG asked if there were any extra sunglasses in the car. 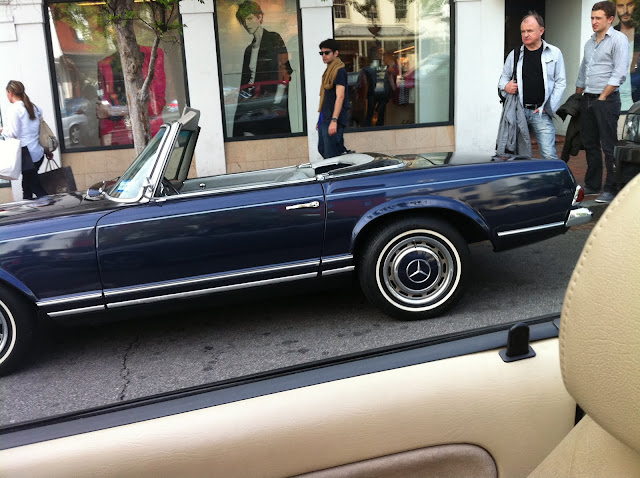 The 560SL procurement-due diligence-vetting process has opened our eyes to spotting SLs methinks, with a keener eye and greater regularity. My circumstances aren’t conducive to getting one of the Pagodas but we sure did love spotting this one in Georgetown on Easter Sunday. 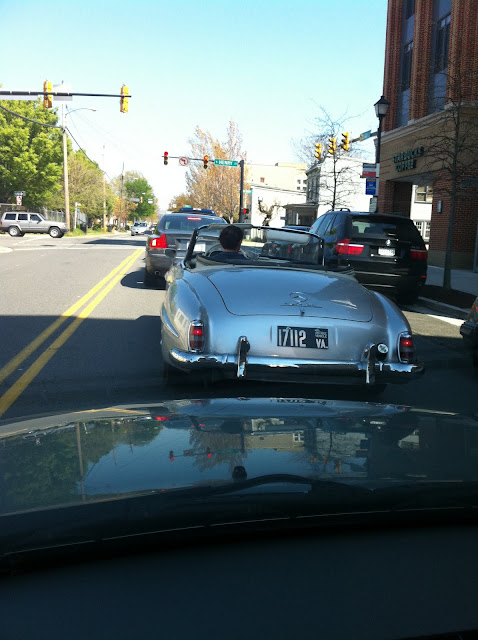 I’ll do another 560SL post shortly, when I have something to crow about. 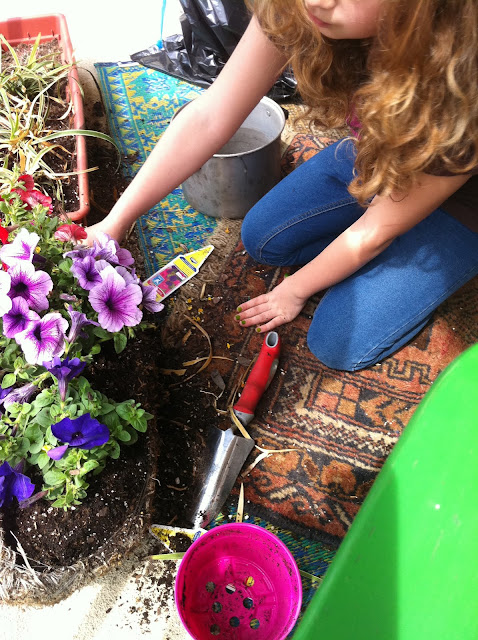 So back at CasaMinimus LFG and I decided to do our spring planting. Hindsight is breathtakingly easy, 20/20 and I think, sometimes arrogant. But…if I had it to do over, I’d have stayed in my marital home. All of you decorator/design folks that read my drivel would've loved the bones of our seventy year old house and its mature trees and plantings. And digging outside was my greatest love. My compost project was as painful to leave as anything. So my compensatory unguent, other than Sinsayshun, involves planting in pots. 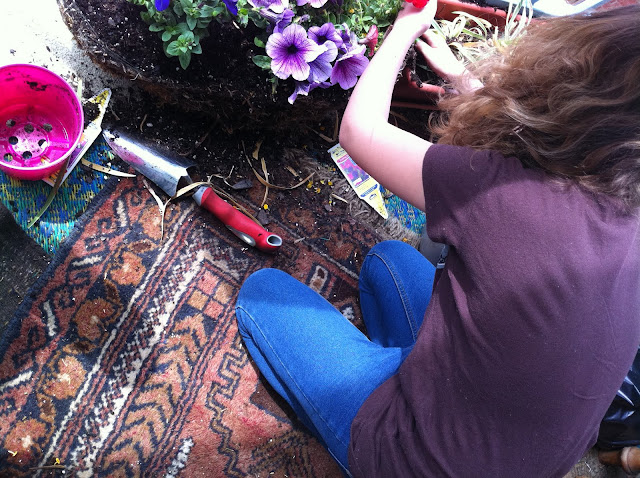 LFG and I reloaded the pots and tidied up my little sanctuary a bit. 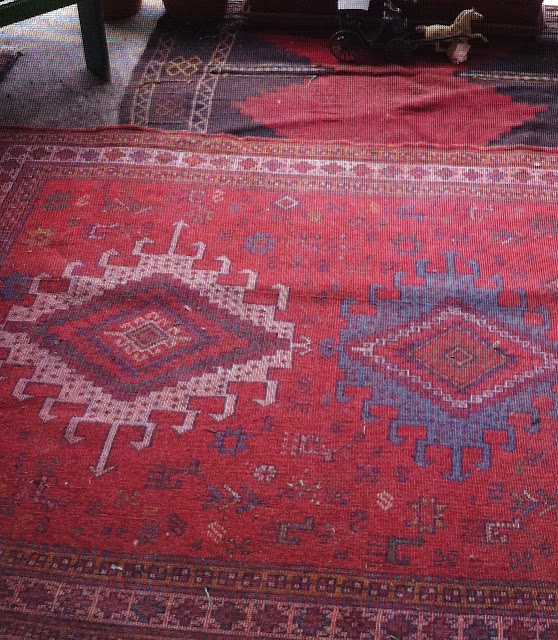 Tidying up included turning the rugs. And here’s the deal, for the zillionth time, on the outdoor rugs. Yes, they remain outdoors year around. 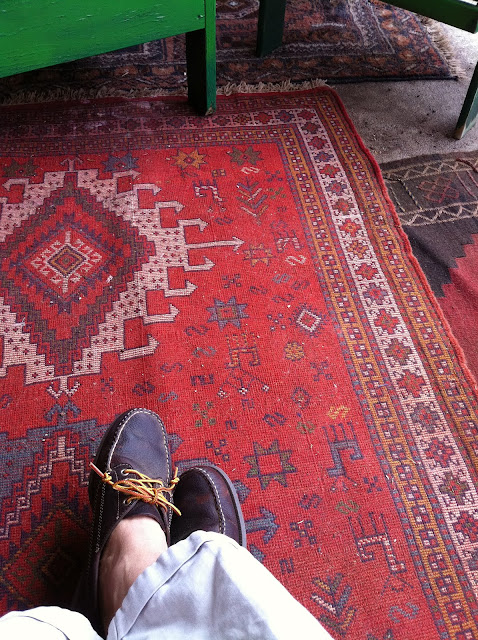 Yes they are old.. but not valuable...handmade carpets that I got in my divorce divvying. I shake ‘em out a few times a year and then, like this year, turn them over bi-annually. They get a good dose of patinating, bleaching sunshine but only a hint of rain from time to time. 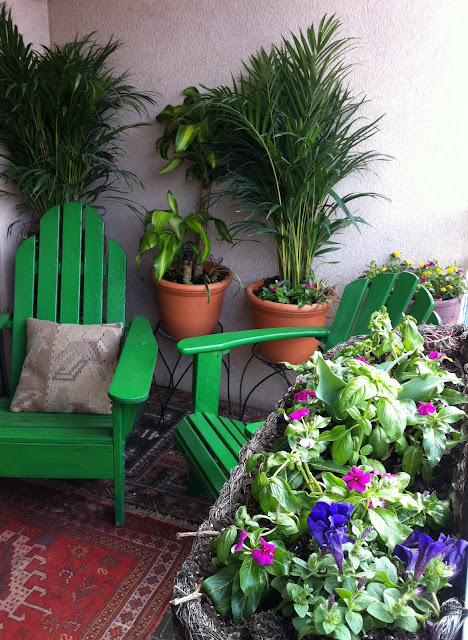 And turning them over provides us with a fresh, clean look…at least for a while. I love communing out here with cocktails. Come see us and we’ll serve you up something. I’m thinking Martinis and Vienna Sausages with Wheat Thins. 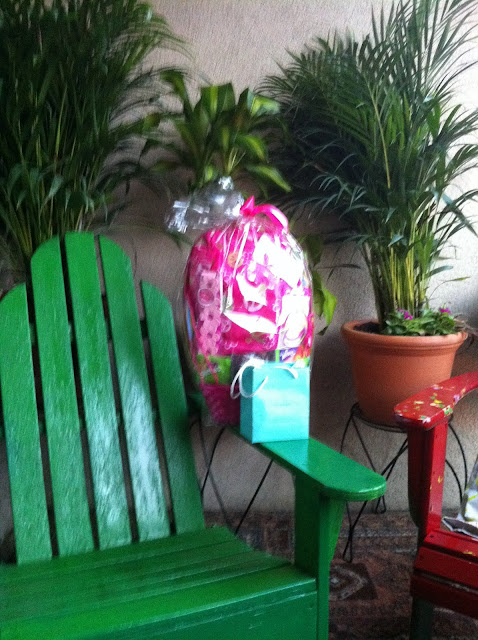 The Easter Bunny, of course, showed up. Outside.  Adirondack chairs, carpets and freshly planted flora seemed an appropriate shrouding for Easter loot that included a little blue box. 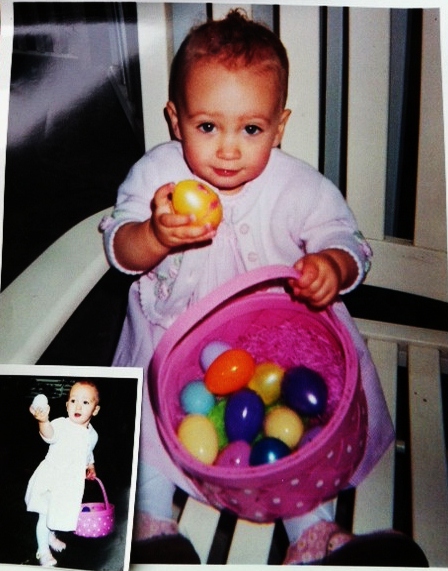 And I recalled the hilarious Easter Egg Hunt that little twenty month old LFG attended. She was an amiable child, even back then. She was all-in when the gist of the egg hunt was explained to her. She was, at twenty months old, uncannily verbal. "Less go daddy"...And then she got pissed. It seems that Miss LFG thought that ALL of the eggs had been hidden for her. She delighted every time she found yet another egg. But when she saw others awash in the same glee, she got riled. "Mine! Nope, those are theirs and these are yours! Mine? Nope little bald girl and besides, you've found plenty". She's never had a tantrum and didn't have one then. She just ruminated. And then napped. 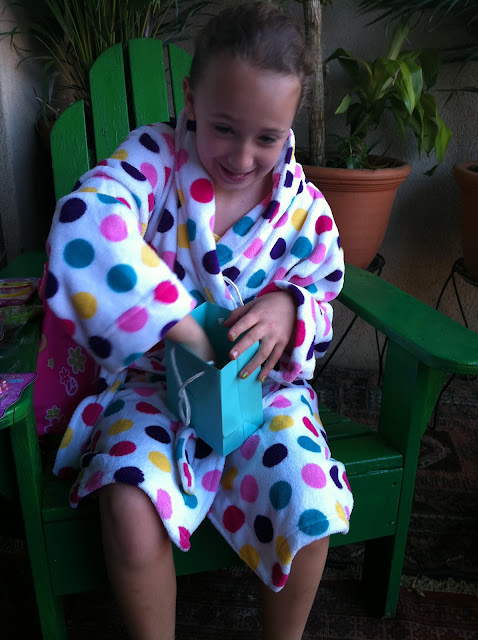 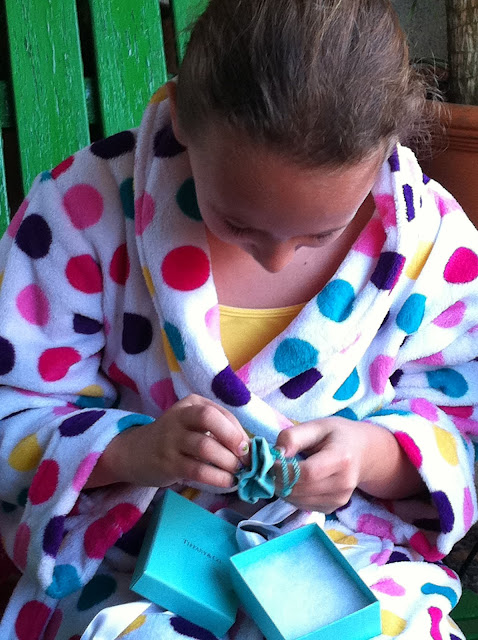 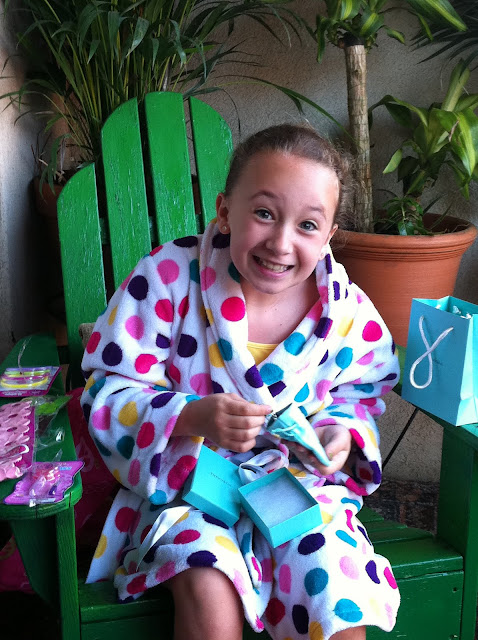 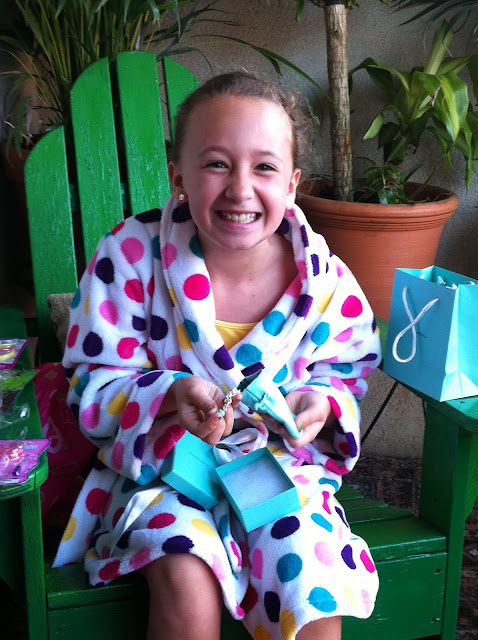 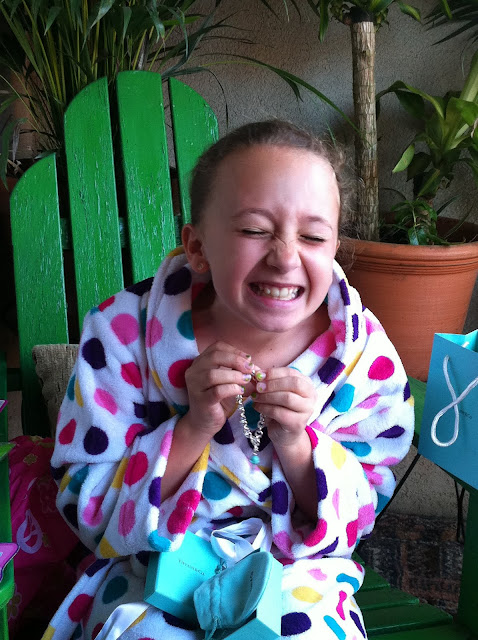 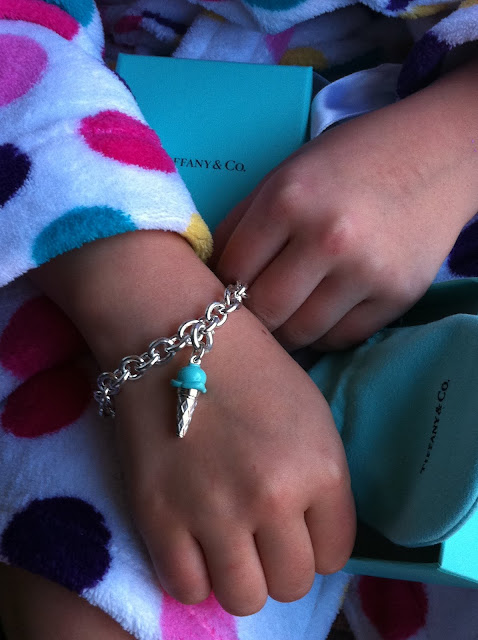 The LFG charm bracelet is currently back up at Tiffany in NYC getting her first charm permanently attached as well as having a few links removed for now. I’m looking forward to the tradition of finding little sterling charms for LFG during my/our travels. Yes, I’m trying to ruin her for any other man. Don’t challenge me on this. 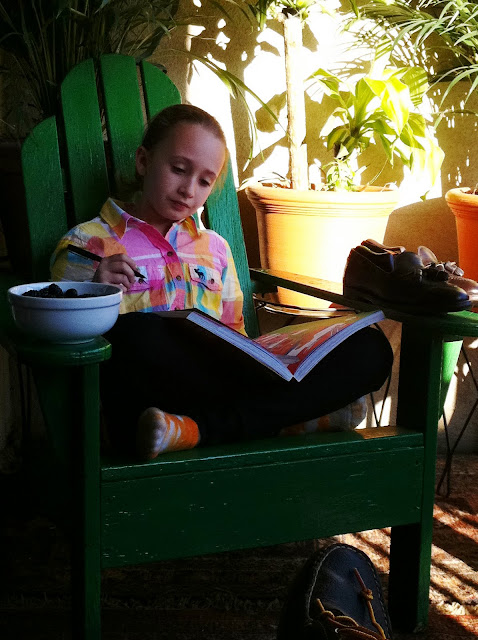 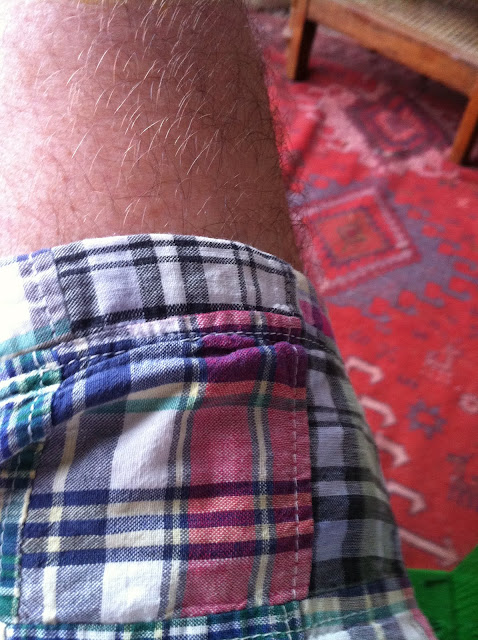 Pasty in madras.
ADG II Travelling
Posted by ADG at 5:58 AM

Great post and it is more than obvious what a great Dad you are....you are truly blessed.

Aren't you breaking your rules by wearing patch madras before July 4th - or were those rules in effect only in 2010?

LFG gets more and more beautiful each time I see her pictures! Parenting is fairly easy when one's child is perfect :O)

My wasband was also the lucky one who got to take our kiddo to the 3-D movies! Now we just drive carfuls of teenagers to and from. That's nature's way of preparing us to hand over the car keys in one short year. I think.

You really DO kick ass at the whole daddy thing. Well done.

You aren't ruining LFG for other men, you are just setting the bar at an appropriately lofty height.

You're a Helluva guy, ADG. If I am ever so lucky as to have children of my own, I hope I can be half the Dad you are to LFG.

The world is the girl's ice cream cone!

Tiffany blue would taste like coconut cream on cold sterling.

Ruin her as much as possible. It's the only way to raise a daughter. The Dora story really got me on this Monday afternoon. What a sweetheart - you and her mother can take all the credit for that. xoxo

Our collective darling is growing up way too quickly. where is the time going?

Thanks everyone. Like I mentioned, it's easy being a good parent to such a good child. Whip crackin'....you just know that I could do it if necessary!

LimeGreen...the madras/linen/seersucker rules are all out of whack right now.

I think her smile says it all...Well done, ADG

Absolutely adorable, and I'm so glad you're ruining her for any other man. My father did the same, but oops! Prince Charming did come along. He's still charming after all these years, but there's no one on earth like Daddy.

These pictures do tell a lot of stories. Stories of simple fun and simple lifestyle.

The smiles and the laughing eyes say it all -- Spring break is fun!

Beautiful photos. As you say "good raw material" with which to work.

And the rugs on the porch? Possibly the most stylish thing that I've ever seen.

Fabulous post! I'm particularly partial to the charm bracelet story as I cherish mine! Such a good Daddy to start her early. Well played sir!

LFG is so thrilled. What a nice memory this will be for both of you.

FogeyYoung...yes indeed. And as long as LFG remains the good citizen of the world that she is...the job of shepherding her remains a delightful one...I know, I know...something's gonna get wobbly at some point. But till then, I'll remain in denial. It's fun. Denial.

Nelle...thanks and nice to hear from you.

Eleganto...I got all the rugs in my divorce. So they's a therapeutic thread that runs through the ones that are exposed to the elements. Deep ain't it?

AnonProductPlacement....sarcasm accepted. Tiffanys sent their stylist and placement crew over here two weeks in advance to sort out how and what they wanted me to do.

Elizabeth...thanks. LFG, along with God, is my survival strategy. Oh, and shoes and clothes and cars and Sinsayshun.